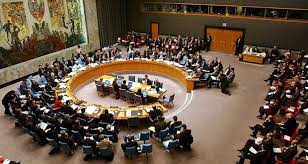 The US has vetoed a draft text providing for extending protection to Palestinian civilians in Gaza.

The text proposed by Kuwait garnered 10 votes in favor, but the US vetoed the text, which it said failed to even mention Hamas, and the group’s responsibility for protecting civilians. Four countries abstained.

The draft would have urged the Security Council to consider “measures to guarantee the safety and protection” of Palestinian civilians and requests a report from the UN Secretary-General on a possible “international protection mechanism.”

The US has tabled its own draft text that would have called on Hamas and Islamic Jihad to “cease all violent activity and provocative actions, including along the boundary fence.” This text did not get any support except from the US itself, with three Security Council Members rejecting it and 11 abstaining.

Several members said the US text was tabled without prior consultation, and did not take into account the overall context of the Israel-Palestine conflict.

Before voting on the Kuwaiti text, US Ambassador Nikki Haley said that “the terrorist group Hamas” bore primary responsibility for the “awful” living conditions faced by civilians in Gaza.

“A necessary precondition for peace is recognition of reality. One of those realities is that Hamas is a major impediment to peace. They are in charge of Gaza, and they use their resources not to help the people of Gaza but to wage war against Israel,” she said.

“Another reality is when the United Nations sides with terrorists over Israel, as the Kuwait resolution does, it only makes a peaceful resolution of this conflict harder to reach,” she added.

Immediately following the US veto, Mansour Ayyad Al-Otaibi, Permanent Representative of Kuwait to the UN, said that the failed resolution had been submitted on behalf of the Arab countries and has been supported by the Organization of Islamic Cooperation (OIC) at its recent summit in Istanbul.

“We deplore that the Council failed to adopt the resolution, which stipulates protection should be provided to the Palestinians” who he said were in dire need and enduring a “tragic situation in the face of massacres by Israel, the occupying Power”, he said.

The UN had repeatedly called for calm last month along the border of the Gaza Strip – the Palestinian enclave occupied by Israel – where hundreds of thousands of Palestinians participated in “the Great March of Return” from 30 March to 15 May.

But at the climax of demonstrations on 14 May to mark “al-Nakba” or “the Catastrophe,” by which Palestinians remember their mass displacement during the 1948-1949 war, at least 60 Palestinians were killed at the border fence by Israel security forces who fired live ammunition, rubber bullets and tear gas.

They were protesting United States recognition of Jerusalem as Israel’s capital, and the official opening that day of its embassy there.