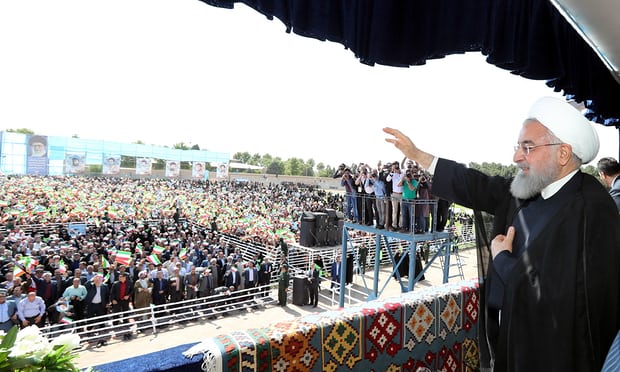 Iranian President Sunday pledged to withstand US threats to pull out from the nuclear deal, vowing that Iran will not relinquish its defense and military program whatever the threat.

The fate the three-year old nuclear deal between Iran and world powers is on line as US leader Donald Trump is due next week to decide whether to remain part of the pact or leave it. The American leader has slammed the deal calling it “rubbish” as, he claimed, it contains flaws.

In a speech Sunday, President Hassan Rouhani indicated that the US will regret its decision and that the Islamic Republic will resist whatever decision may come from the White House.

“We have plans to resist any decision by Trump on the nuclear accord,” Rouhani said in the speech aired on state television.

“America is making a mistake if it leaves the nuclear accord,” he added.

The same day, Rouhani warned that Iran will scale up its military program despite the US threat.

“We will not negotiate with anyone about our weapons and defenses, and we will make and store as many weapons, facilities and missiles as we need,” he said in another speech in the northeastern part of the country.

Trump has taken swipe at the deal arguing that it failed to control Iran’s ballistic missile program, which, according to him, is threatening US allies in the region, namely Saudi Arabia.

European US allies have been struggling to convince Trump not to pull out from the deal, arguing that despite being “bad”, the deal is the best solution for stability in the region.