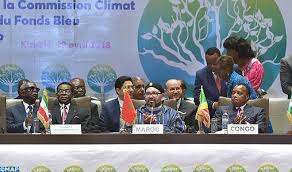 Morocco and the Republic of Congo have decided to give a new momentum to their strategic “win-win” partnership with the signing of 14 cooperation accords.

The agreements, part of moves to bolster South-South Cooperation, were signed on the occasion of the friendship and working visit paid by the Moroccan Sovereign to the Congolese capital to attend the 1st Summit of Heads of State & Government of Climate Commission of Congo Basin and Blue Fund for Congo Basin.

King Mohammed VI also launched with President Denis Sassou N’Guesso the construction works for the building of a site for fishermen to unload their catch in the Yoro port.

This €2.6-million-project will contribute to the preservation of sea resources and the protection of the marine environment. It will also help improve the living and working conditions of traditional fishermen.

The project will be built over 1.7-hectare area. It will include facilities for fish handling, packaging, marketing and processing, including a market hall, ice factory, administrative offices, 150 fishermen’s shops, repair workshops for small fishing boats and children’s day-care center.

During his visit to the Republic of Congo, the Moroccan Sovereign addressed the 1st Summit of Heads of State & Government of Climate Commission of Congo Basin and Blue Fund for Congo Basin held Sunday (April 29).

The Congo Basin is “the world’s second most important region for global carbon storage and the second largest river basin. It is also one of the largest forest areas on the planet – a region which is home to more than half of the Continent’s animal species”, said the King in his address to the African summiteers.

This regulator of the planet’s climate makes Africa the world’s second lung, after the Amazon Forest. And “if we want to protect the two lungs of the planet, this challenge must become a collective ambition nurtured by Africa and the world”, added the Monarch.

“Let us be aware of our wealth and of our ability to innovate. Let us pool our energies and summon our courage”, said King Mohammed VI, affirming that the protection of environment is the cornerstone of African co-emergence and the bedrock on which the Continent’s inclusive economic growth will be built.

“We must work together to tackle global warming and its risks, and transform our economies to promote sustainable development”, underlined the Moroccan Sovereign, saying that the North African Kingdom “will work resolutely and unremittingly” for the implementation of the Continent’s large-scale development projects within the frame of solidarity-based South-South cooperation.