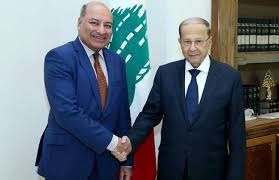 The European Bank for Reconstruction and Development has expressed its readiness to help Lebanon address its socioeconomic challenges and alleviate pressure exerted on the country’s infrastructures due to refugee influx.

“Lebanon is a country of immense potential and crucial for regional stability,” said Monday EBRD President Suma Chakrabarti at the end of his first visit to the Bank’s newest country of operations.

During his visit, President Chakrabarti focused in meetings with the Lebanese authorities on the importance of improving the business climate in the country.

He said: “Lebanon has a vibrant and highly competitive private sector which we will support to contribute to the economic growth of the country”.

“We are also committed to easing the pressure on the host community by helping to address the enormous strain on the country’s infrastructure caused by the refugee influx. Lebanon has confronted this challenge with audacity and deserves our firm support”, added EBRD chief

The EBRD shareholders voted in favor of Lebanon’s request to become a member and country of operations of the Bank in 2017. In only a few months, the Bank has built a strong project pipeline and President Chakrabarti’s inaugural visit provided the opportunity to sign the first two projects in the country: the acquisition of a 2.5 per cent equity stake in Audi Bank and the provision of a €50 million trade facilitation line to Fransabank.

During his visit, the EBRD President met Lebanon’s Prime Minister, Saad Hariri, the Speaker of Parliament, Nabih Berri, the Governor of the Central Bank, Riad Salameh and several other Lebanese officials.

President Chakrabarti focused on the economic development of Lebanon and on the highly promising steps already undertaken under the country’s new reform program. He commended the authorities for their efforts to bring forward legislation about public-private partnerships in infrastructure and the passing of the national state budget.
EBRD will participate in the Cedar Conference in April and will show strong support for the country’s 10-year $ 16 billion capital investment plan.

“This conference is very important as it demonstrates the international community’s strong interest in supporting Lebanon. But the continuation and progress of the program of reform and the implementation of the initiatives that will be launched at the conference are key”, he stressed.

The Cedar Conference will take place in Paris on 6 April. It is an international donor conference with the aim of providing Lebanon with financial support to strengthen the implementation of crucial reforms. The conference, also known as Paris IV, will be one of three international meetings due this year at which Lebanon will seek support for its economy and help in dealing with the approximately one million Syrian refugees it is hosting.

Lebanon became a recipient of EBRD investment, policy engagement and technical assistance in September 2017, joining Egypt, Jordan, Morocco and Tunisia as part of the Bank’s southern and eastern Mediterranean (SEMED) region, where the EBRD has been active since 2012. In May 2017, the EBRD also began engagement in the West Bank and Gaza.

The EBRD was established in 1991 with the goal of supporting the development of market economies and promoting the private sector. Having started in central and eastern Europe, today the Bank operates in 38 economies across three continents, from Morocco to Mongolia and Estonia to Egypt.

To date, the Bank has invested about €120 billion in more than 5,000 projects. The southern and eastern Mediterranean region, to which Lebanon belongs, is currently the fastest-growing region of EBRD operations, with more than €6.7 billion in over 175 projects in less than six years.