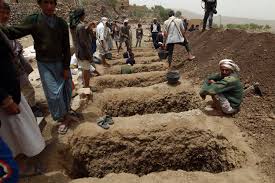 Women have not been spared in war-torn Yemen where the Houthis have killed 675 women over the last three years, according to the Yemeni minister of social affairs and labor.

“The [Houthi] coup militias have killed more than 675 women since their coup against the legitimate government,” Ibtihaj Abdullah Al-Kamal was quoted by Middle East Monitor as saying.

Besides the hundreds of women wounded, more than 4,500 cases of violence against women were registered in a number of provinces, the official said.

He accused the Houthi group of forming a women’s military brigade, recruiting more than 350 women and using them in military operations and raids.

According to Middle East Monitor which carried the statements, the accusation was made Thursday on International Women’s Day, where the world witnessed celebrations, strikes and protests to mark the day.

In May last year, it was reported that the Houthis opened training camps for women who were then being exploited and deployed across Yemen.

The Houthis took control of the capital Sana’a back in September 2014, with the assistance of an alliance of convenience with late and former president Ali Abdullah Saleh and forces loyal to him.

The Saudi-led coalition was invited in March 2015 by the internationally recognized President Abd Rabbuh Mansur Hadi to defend the country against the Houthi armed group.

Human Rights Watch accuses the Houthis of abduction, enforced disappearance and torture of a number of individuals, including journalists and political prisoners.