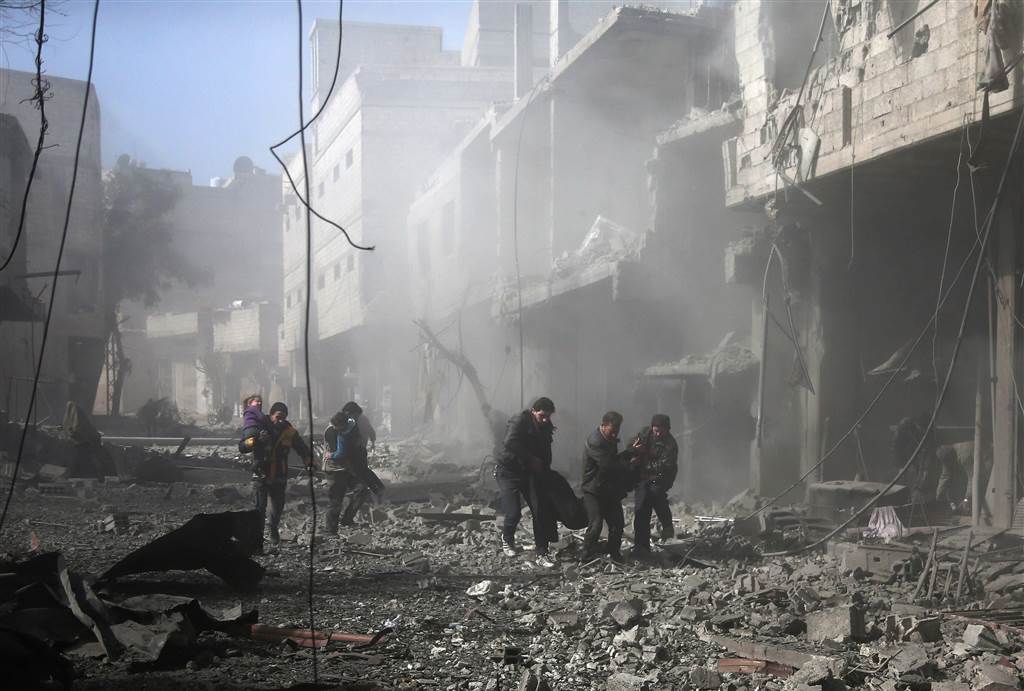 The Syrian regime has unleashed its fury on civilians in eastern Ghouta firing rockets and barrel killing dozens. On the fourth day of the intense attack, the UN and aid agencies have urged a cessation of fighting in order to enable aid to be delivered to the besieged population.

The civilian death toll to more than 270 – including 60 children – over the past three days, as the pro-Syrian government forces continue to pound Eastern Ghouta with air cover from Russian air force.

UN Secretary-General Antonio Guterres calling the rebel-held enclave “hell on Earth”, adding that “this is a human tragedy that is unfolding in front of our eyes, and I don’t think we can let things go on happening in this horrendous way.”

The UN’s high commissioner for human rights, Zeid Ra’ad Al Hussein, on Wednesday also called for an immediate halt to hostilities, warning that “civilians were being slaughtered in droves”.

“These are hundreds of thousands of civilians who have been trapped for over five years under siege, suffering deprivation of their most basic needs, and are now facing relentless bombing,” Zeid Ra’ad Al Hussein said in a statement.

“How much cruelty will it take before the international community can speak with one voice to say enough dead children, enough wrecked families, enough violence, and take resolute, concerted action to bring this monstrous campaign of annihilation to an end?” he added.

Terrified residents in the area, where 400,000 people are trapped on the outskirts of Damascus, were sheltering in caves, dugouts and basements, as a hail of explosives hit homes, roads and hospitals amid what aid officials warned was an unfolding “humanitarian catastrophe”.

“Aid delivery should be completely separated from any political negotiation. Humanitarians should be allowed to do their work and to deliver aid on a more regular basis,” Ingy Sedky, the spokeswoman for the International Committee of the Red Cross (ICRC) in Syria said.

The surge in killing in Ghouta came amid reports of an impending regime incursion into the area, as forces loyal to President Bashar al-Assad look to regain control of a rebel stronghold that was once the capital’s breadbasket.

Since the Syrian Government and their allies escalated their offensive against opposition-held east Ghouta on 4 February, there have been more than 1,200 civilian casualties, including at least 346 killed and 878 injured, mostly in airstrikes hitting residential areas, according to reports documented by the Office of the UN High Commissioner for Human Rights (OHCHR).