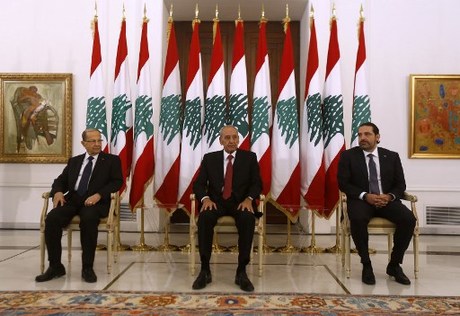 The three Lebanese leaders denounced in the strongest terms the Israeli border wall, which, they said, infringes Lebanon’s sovereignty and undermines border stability.

The Israeli threats are a clear violation of Security Council Resolution 1701 and a direct threat to the stability of the border region, the three leaders said in a statement following their meeting at the Presidency.

The three leaders vowed to “continue to move at various regional and international levels to prevent Israel from building the wall within the Lebanese border and the possibility of its encroachment on oil and gas wealth in Lebanese territorial waters.”

Aoun, Hariri and Berri met with the UN mission in Lebanon (UNIFIL) force commander Major General Beary in late January over the issue of Israel’s wall construction. Lebanon then accused Israel of undermining peace with its construction, stressing that it “isn’t compatible with the efforts that (UNIFIL) is exerting in cooperation with the Lebanese army to preserve security and stability along the southern border”.

The construction of the wall was also criticized by Hezbollah’s Secretary General Hassan Nasrallah who warned Israel against the continuing construction.