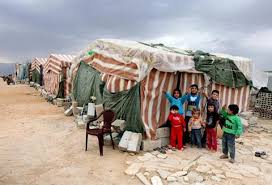 The number of Syrian refugees in Lebanon has dropped to less than one million for the first time since 2014, the United Nations High Commissioner for Refugees (UNHCR) said.

“The number reached one million in April 2014, and this is the first time it drops below that,” Lisa Abou Khaled told the press.

She added that 75,720 refugees, mostly Syrians, were sub-mitted for resettlement between 2011 and September 2017, while more than 49,000 people were deported over the same period.

Around 175,000 Palestinian refugees live in Lebanon, 45 per-cent of them in 12 refugee camps and 55 percent in 156 pop-ulation centers throughout the country, according to a census conducted by Lebanon’s Central Administration of Statistics in partnership with the Palestinian Central Bureau of Statistics.

The total of Palestinian refugees is much lower than the offi-cial figure of 500,000, cited by the United Nations Relief and Works Agency for Palestine Refugees in the Near East.