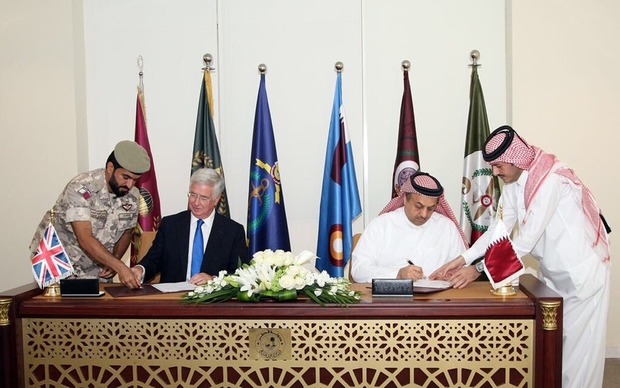 Qatar and the United Kingdom (UK) struck a deal Sunday for the purchase by the Gulf country of 24 typhoon fighter jets for a contract worth $8 billion, few days after placing order for 12 French Rafal war planes.

The deal was signed by Qatar’s defense minister Khalid bin Mohammed al-Attiyah and his British counterpart, Gavin Williamson in Doha and materialized a September Memorandum of Understanding (MoU).

UK’s BAE Systems will provide the jets. Qatar also inked an intention agreement to place order for additional military equipment, which may include Hawk aircrafts.

Aside from the war planes, Qatar and the UK also signed additional agreements including building up QEAF/RAF joint operational squadron (JOS) in the framework of the 2022 Fifa World Cup to take place in the Gulf country.

The Sunday signing followed the December 7 agreement with France for the purchase of 12 French Dassault Rafal war planes and intention to acquire 490 VBCI armored vehicles from Nexter, a French government-owned weapons manufacturer.

Qatar has also signed military agreements with Italy and the US.

The new signings come in a contest of diplomatic tension in the region. Doha since June 5 has been facing boycott by its neighbors and Egypt, which accuse it of supporting terrorism.

Qatar has denied any wrongdoing and accuses the Saudi –led group of smear campaign.