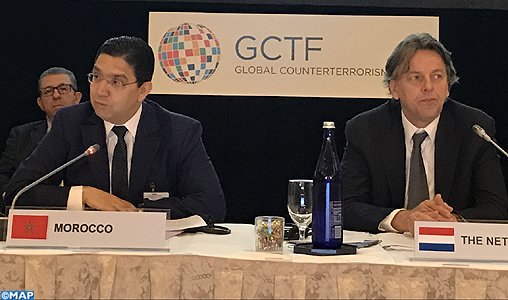 The US coordinator for counterterrorism, Nathan A. Sales, underscored Morocco’s core contribution to international anti-terrorism efforts through its leading role as co-chair of the Global Counter-Terrorism Forum (GCTF).

The US official said at a hearing before the US senate foreign relations subcommittee on Near East, South Asia, Central Asia and counterterrorism, that Morocco, which co-chairs with the USA the “Initiative to Address Homegrown Terrorism”, has undertaken efforts domestically and in the region to combat radical ideologies and violent extremism.

He commended the “leadership” of Morocco during the hearing held under the theme: “Beyond the Islamic State: the fight against terrorism, radicalization and the promotion of stability in North Africa”.

Morocco and the Netherlands had been re-elected as chair of the Global Counter-Terrorism Forum for a new two-year term, on the occasion of the 8th ministerial meeting of this body, held last September in New York.

The United States and Morocco officially launched the “Initiative to Address Homegrown Terrorism” on November 16 in Malta, convening over 70 government officials, law enforcement officers, and non-governmental representatives from 25 countries.

In April 2016, Morocco took over the GCTF co-chair role from Turkey. Morocco and the Netherlands serve as GCTF co-chairs and the co-chairs of the GCTF Foreign Terrorist Fighters Working Group.

In addition to serving as Co-Chair of the GCTF, Morocco participates in the State Department Antiterrorism Assistance Program, cooperates with US Customs and Border Protection and DHS to address watch-listed travelers. Morocco also has a framework agreement with the US to develop “mutual expertise in the areas of crisis management, border security, and terrorism investigations to strengthen regional counterterrorism capability and to deny space to terrorism and terrorist networks.

Likewise, Morocco is at the forefront of efforts to counter the appeal of violent extremism within its own borders and in the broader region. One of Morocco’s key programs to provide religious training – by the Mohammed VI Institute for the Training of Imams, Morchidines, and Morchidates, which aims to prepare the next generation of Muslim religious leaders from across the region to counter extremist interpretations of Islam – continues to be in high demand, and in 2018 will welcome a record 1,240 foreign Islamic preacher trainees from Mali, Guinea, Côte d’Ivoire, Senegal, Chad, Nigeria, and France.