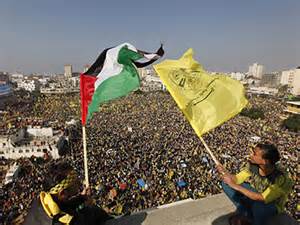 Hamas, which has been in control of the Gaza enclave for a decade now, said in a statement it was shocked to see that the ministerial meeting failed to refer to and designate Israeli occupation and its crimes as terrorist acts.

A meeting of Arab League foreign ministers in Cairo on Sunday accused Hezbollah of being “responsible for supporting terrorism and terrorist organizations in Arab countries, with modern weapons and ballistic missiles.”

The emergency meeting, called by Riyadh, took place amid flare-up in the region following a series of incidents including interception in Riyadh of a ballistic missile launched from Yemen by Iran-backed Houthi rebels.

Saudi Arabia blamed the Lebanon Shia group for connection with the attack.

Hamas also urged the Arab League to support Palestinian resistance against Israel and urged for dialogue to solve their divide.

Hamas, a Sunni group, is closely linked with Iran and Hezbollah both from whom it receives support.

“We only sent Kornet missiles to the Gaza Strip,” Nasrallah said, referring to anti-tank missiles used against Israeli forces.

“The State of Qatar has always been an essential supporter of Palestinian reconciliation and it has provided all its assistance to aid the Palestinian people and defend their legitimate rights,” Hamas said in a statement.