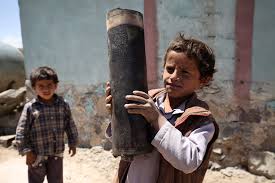 At least 130 children are dying every day in Yemen from extreme hunger and diseases including widespread cholera, warned the International Committee of the Red Cross (ICRC).

Two weeks after Saudi Arabia imposed a land, sea and air blockade on Yemen, a country already devastated by two and a half years of Saudi bombing, the Red Cross has issued numbers raising concern over worsening humanitarian conditions in the country where 2.5 million people are lacking access to clean water.

On Friday, the ICRC said that three cities in Yemen – Saada, Taiz and Hodeidah – had run out of clean water because the Saudi-led blockade had cut imports of fuel needed for pumping and sanitation.

Since April, some 940,768 people in Yemen have been infected with cholera, a water-borne disease, in the world’s worst epidemic in a single year that has killed at least 2,200, and cases of dysentery are being reported, she said.