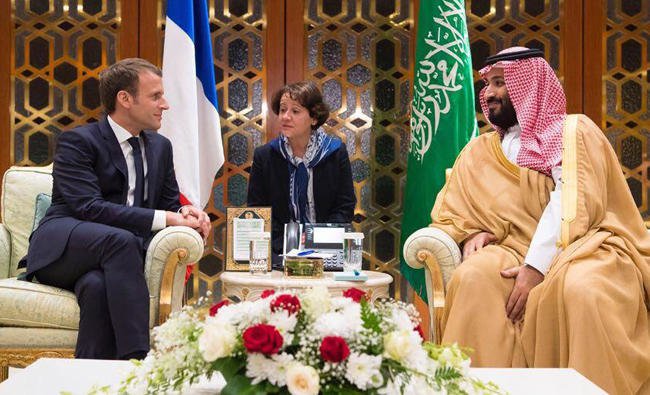 French President Emmanuel Macron, at a meeting with Crown Prince Mohamed bin Salman in Riyadh Thursday, condemned Iran’s support for Yemen Houthis who launched over the weekend a ballistic missile into Saudi Arabia.

Macron made an unplanned visit to Saudi Arabia following his visit in United Arab Emirates (UAE) where he attended the inauguration of the Abu Dhabi Louvre Museum.

The French leader decided to fly to Riyadh following three major events: Lebanese Prime Minister Saad Hariri’s resignation; launch of ballistic missile by Iran-backed Yemen Houthi rebels into Saudi Arabia; and the anti-corruption purge, which took place in the kingdom over the weekend.

The Houthi-launched missile reached the Saudi capital before it was intercepted and destroyed near the city’s international airport.

Saudi Arabia condemned the strike and blamed Iran for the action arguing that it amounts to an act of war.

Macron also condemned the attack saying that it reflects Iran’s missile capacity. He however made it clear that France still endorses the 2015 nuclear deal signed between Iran and world powers.

“The missile, launched from Yemen and intercepted by Saudi Arabia, is obviously an Iranian missile, which shows precisely the strength of their” program, Macron told journalists at a news conference held at a French school earlier in Dubai.

He did not touch on the anti-graft purge, which has seen over 200 people including princes and high profile businessmen and officials arrested on Saturday.

The crackdown followed the establishment of the anti-corruption commission supervised the Crown Prince MbS who also leads the country’s economic and structural reforms.