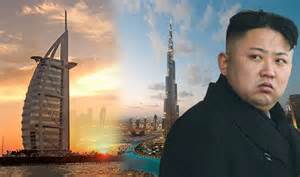 United Arab Emirates (UAE) Thursday announced it ended the mission of its non-resident ambassador to North Korea and that of the non-resident North Korean envoy to the Gulf country.

The move also hit the Korean companies operating in the seven Emirates making the Gulf country. The Emirati state news agency, WAM notes that the US ally also has ended issuing visa for North Korean nationals.

There are up to 1,300 North Koreans working in the UAE.

US President Donald Trump has called on all US allies to cease cooperation with Pyongyang in order to scale up pressure on the Asian country so that it abandons its missile program.

Qatar, which will host FIFA 2022 World Cup, said it stopped issuing visa for North Korean workers as of 2015. There are still 1,000 workers in the small emirate but the government noted that their number will significantly decrease as their employment contracts edge towards expiration.