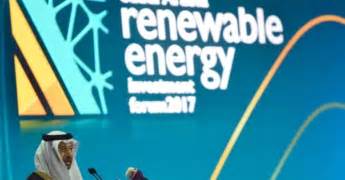 Saudi Arabia Tuesday announced it would invest over the coming five years close to $67bn to meet its energy demand with focus on renewable energies.

The investment, according to energy minister Khalid al-Falih, will fuel production of 80,000 megawatts (MW).

The investment to be sponsored by the private sector falls within the kingdom’s plans to diversify its energy sources.

The world’s large oil exporter envisions production of 17.6 gigawatts of nuclear energy by 2032.

As part of the plan, Chief of atomic energy office of King Abdullah City for Atomic and Renewable Energy Maher al Odan noted Tuesday at a press conference in Riyadh that contract to award building of the first Saudi nuclear power plant will be signed by the end of next year.

In addition to the nuclear plant-produced energy, authorities expect to produce 3,500 MW from renewable of energy by 2020. The output could increase to reach 9,500 MW by 2023.