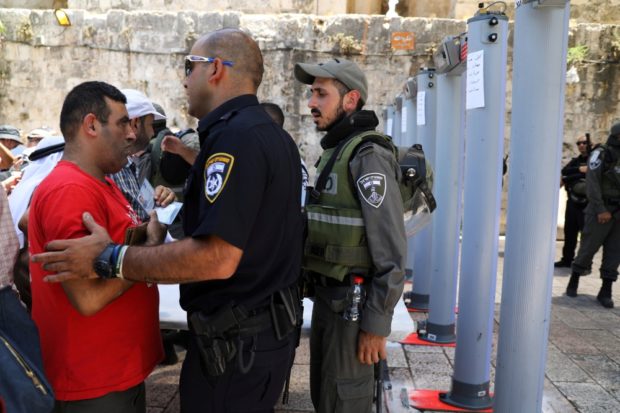 The decision by Israeli authorities to reinforce security measures near the Al-Aqsa mosque following the killing of two policemen last week has been unwelcomed by Muslims in the area as well as Palestinian authorities.

Fatah described the move as “terrorist procedures” imposed by the Israelis and also accused the authorities of carrying out “fierce and organized attack” on residents of East Jerusalem.

Muslims have refused to pass through the metal detectors placed at the entrance of the gates to Al-Aqsa and preferred praying on the outskirts. They argue that abiding by the new security measures will reinforce Israel’s questioned sovereignty claim over the area.

Mahmoud Al-Habbash, president of the Palestinian Authority’s (PA) judicial system and an advisor to PA chairman Mahmoud Abbas on religious affairs, signaled that the Jewish State’s “crimes” would contribute to the deterioration of peace and security. He called for an end to the occupation and “returning Jerusalem and the Al-Aqsa Mosque to Palestinian and Islamic hands, granting the Palestinian people their rights and establishing a Palestinian state with Jerusalem as its capital.”

Israel dispersed those gathered to pray outside on Monday evening because they posed “a threat” to the safety of the security officers and other road users, according to police spokeswoman Luba al-Samri. Jerusalem’s police commissioner Yoram Halevi said they are “determined to create security” and “we can’t let this just pass.”

The body responsible for administering the al-Aqsa mosque, al Waqf Trust, denounced the measures. It called for the rejection and boycott of “all the Israeli aggression measures, including changing the historical status quo including imposing the metal detectors.” It also supported prayers at the gates of the mosque and in the streets of Jerusalem until the metal detectors are removed.