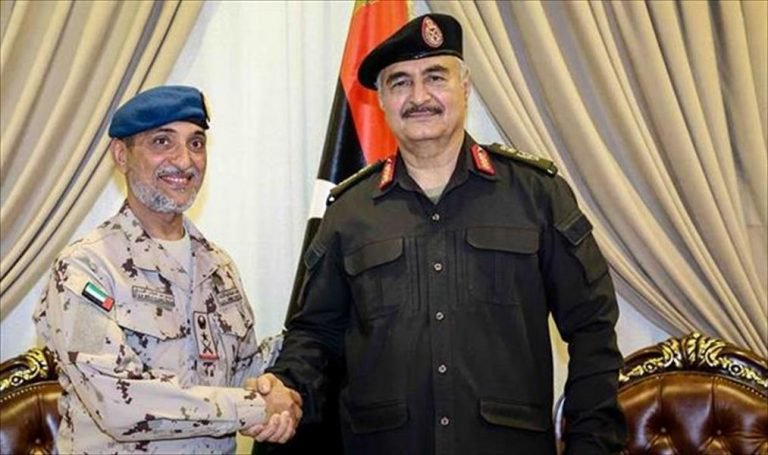 Top commander of Libyan forces aligned with the east-based government has met with deputy chief of staff of the army of the United Arab Emirates (UAE).

Field Marshal Khalifa Haftar met with Major General Eisa Saif Al-Mazrouei in Rajma headquarters in Benghazi to discuss “brotherhood and cooperation between Libya and the UAE at all levels,” Libya Herald reports citing the Libyan National Army, led by Haftar.

Analysts say the meeting means further support on the part of the UAE to the Libyan military commander opposed to the UN-backed unity government.

Haftar has been opposed to the UN-backed Government of National Accord (GNA) established in Tripoli to drive the reconstruction of the North African country.

Since the fall and death of Muammar Gaddafi in 2011, the oil-rich country has been thrown into a pit, left with no central administration.

Rivalries between Libyan factions, supported by different foreign countries, have made it difficult for the GNA to impose its authority over the entire country. Yet, the main danger comes from Haftar who is accused of derailing the UN efforts to re-establish peace in the country.

The UAE has been reported as one of Haftar’s strong backers. The Gulf country has been named in a UN report as violating the UN arm embargo by supplying military equipment to the Libyan general.

The UAE considers Haftar as the right man in the fight against terrorism in Libya but critics say Abu Dhabi is grooming the military figure for the top Libyan job.

UAE is also said to have established a military base in Libya and provided air power in the general’s campaign against terrorists in Benghazi and other locations.