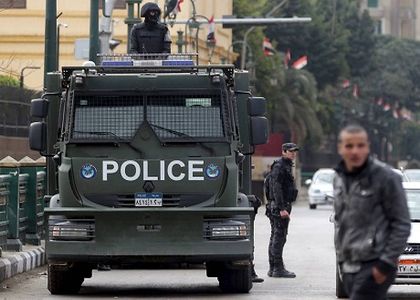 The interior ministry Sunday announced one police officer was killed in a roadside bomb attack near Maadi, a posh suburb of the Egyptian capital.

A police vehicle transporting First Lieutenant Ali Abdelkhaliq, another colleague and three conscripts was hit by a blast from a bomb planted by the roadside, an official from the ministry told state-run MENA news agency.

“The bomb was detonated remotely, and an initial examination suggested it was detonated using a mobile phone SIM card,” the official said.

The passengers sustained injuries in the attack which occurred mid-day.

Maadi is one of the posh districts of Cairo housing several diplomats, teachers, expatriates and rich people.

No group claimed responsibility for the attack. The North African country has been facing insurgency from militants in the restive Sinai province since the removal of Islamist President Mohamed Morsi today in prison.

Though attacks concentrate in the Peninsula, they have spilled into capital Cairo and other cities.

Authorities have accused outlawed Muslim Brotherhood for funding the militant groups and directing the attacks.