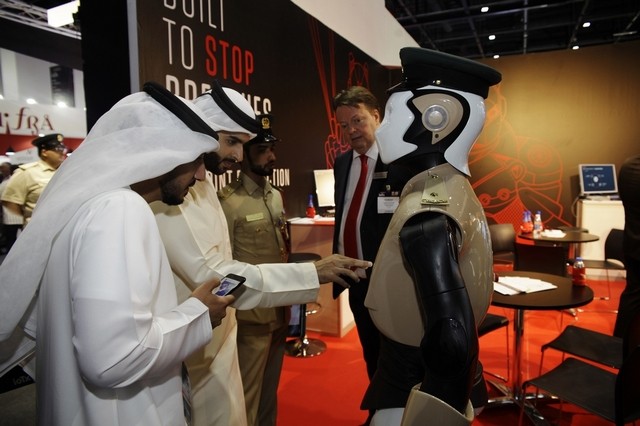 The Robocop was presented at the ongoing Gulf Information and Security Expo and Conference in Dubai.

The Robocop, 170 centimetres tall and weighing 100 kilograms, is outfitted with built-in tablet device and built-in cameras. It will stream video to the police command centre and help people to “complete smart police services through robocop using credit cards for payments, resulting in an enhanced customer service experience.”

Named “Dubai Police Robot”, smart police cop can speak Arabic and English but promotors say other languages such as Chinese, French, Russian and Spanish will be added to its program.

Dubai Police Robot will be used at mall and tourist sites where people can tap a touchscreen on his chest and report a crime or pay traffic fines.

“It has a smart intelligence system so it can protect people from crime, because it can broadcast what is happening right away to our command and control centre,” said Brig Al Razooqi, Dubai Police director general of smart services.

Dubai authorities are looking to replace 25 per cent of police staff by robots, by 2030, to enable police to focus on crime prevention.

Police data from the robot will be shared with the Dubai Roads and Transport Authority to predict traffic bottlenecks, Emirati media The National reports.