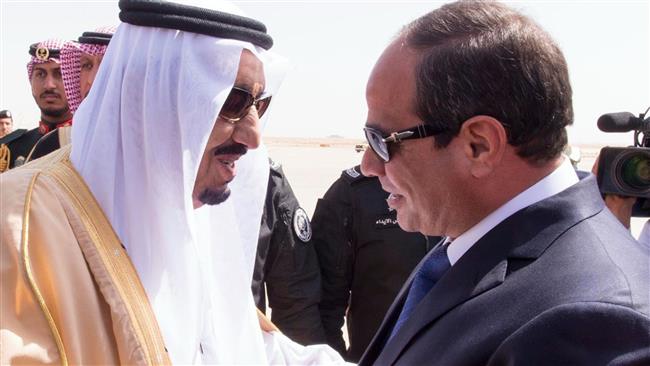 Abdelfettah al-Sisi of Egypt arrived in Riyadh on Sunday in honor of King Salman’s invitation and they would be discussing “regional and international issues of common interest.” The invitation was made in March on the sidelines of the Arab Summit in Jordan. Cairo stated that the visit will contribute to “bolstering strategic relations between the two countries” and among the key issues on the agenda is “the struggle against terrorism which threatens security and stability” in the region.
Saudi’s foreign minister Adel al-Jubeir hailed the “deep, strong, historical and strategic” relations between the two countries after a closed door meeting with his Egyptian counterpart, Sameh Shoukry. He hoped that “more constructive meetings” will be held between them and their bilateral ties “will be always stronger.” The meeting between two ministers dwelled on the “strong bilateral relations and mechanisms of supporting them in the coming period in all economic, cultural, medical, educational and developmental fields.” The crisis in Libya, Syria and Yemen were discussed and emphasis was made on the “importance of finding solutions to these issues in light of identical views of the two countries”, al-Jubeir stated.
On the sidelines of the visit, a Saudi-Egyptian Summit on ways of reinforcing bilateral relations and facing regional challenges will be held. Shoukry noted that it will be an opportunity to deal with regional and international developments as well as discredit rumors that their bilateral relations are going through hard times.
Riyadh was reported to have been unhappy with Cairo supporting a Russian drafted resolution on Syria at the UN Security Council which led to Saudi halting its oil supply to the country a few days later. The fate of the islands of Tiran and Sanafir are also contributing factors to the tension. Al-Sisi reportedly met Salman on the sidelines of the Arab League Summit to break the ice after months of apparent tensions between the two Middle Eastern allies.
Rami Khouri, a senior public policy fellow with the Issam Fares Institute at the American University of Beirut, analyzed that the “two former giants in the region… are trying to regain their roles… by working together” because that’s the way “they can help each other.”