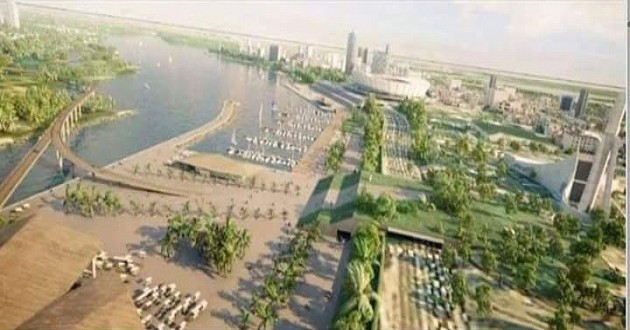 King Mohammed VI, who is in Côte D’Ivoire within the frame of a new African tour, visited on Monday Cocody Bay, which is being rehabilitated under a cooperation accord between Morocco and the West African country.

On this occasion, the Monarch and President Alassane Dramane Ouattara were informed on the progress made in the upgrading of this Bay, dubbed as Abidjan’s jewel, which has suffered severe environmental degradation in recent years.

It is the Moroccan public company Marchica Med which is project-managing the site and supervising this landmark ecological undertaking to cost around $450 million.

According to Marchica Med CEO Saïd Zarrou, the project’s first phase has reached a very advanced status, including cleaning up and landscaping, protection against floods, construction of hydraulic infrastructure, road development and the building of a viaduct.

The project’s second phase includes the Bay’s development and upgrading to improve the citizens’ living conditions and turn Abidjan into a tourist destination.

After the explanations provided by the project manager, the Moroccan Sovereign and the Ivorian Head of State chaired the signing ceremony of a MoU on the Bay’s development and upgrading, which will include the building of the “Rive Plateau”, the Cocody Urban Park and the “Coulée Verte” of Banco.

The “Rive Plateau” will comprise hotels, a trade center, a convention center, and facilities to promote the Ivorian culture. It will also include facilities for recreational, leisure and catering activities near the Abidjan marina.

As to the Cocody bank, it will harbor an urban park that will include a zone for aquatic activities and a site for adventures and discovery.

The Coulée verte” of Banco project consists of cleaning, reforestation and urban development of a 3,000 ha corridor between the Banco forest and the Cocody Bay. It will also help create community-based infrastructure for populations living in neighborhoods and thematic housing projects.

After suffering increased pollution, repeated flooding and accelerated silting by massive urbanization of the Gourou basin, the Cocody Bay was visibly deteriorating.

Following a visit to Abidjan in February 2014, King Mohammed VI ordered Marchica Med to provide assistance to the Ivorian Government and conduct ecological review of the lagoon Ébrié and the Bay of Cocody.

Afterwards, the Moroccan Company has worked out a master plan, in close collaboration with the Ivorian authorities, for the safeguard and development of the Cocody Bay.

The rehabilitation project, offering a sustainable and ecological resolution to the issue of pollution of the bay and its watershed, was launched in June 2015, during another visit by King Mohammed VI to the West African country.

Thanks to its inclusive approach & sustainable development goals, this pilot project is described as a model of South-South cooperation. It reflects the exemplary partnership thriving between the two brotherly countries and shows the way for others to follow suit.