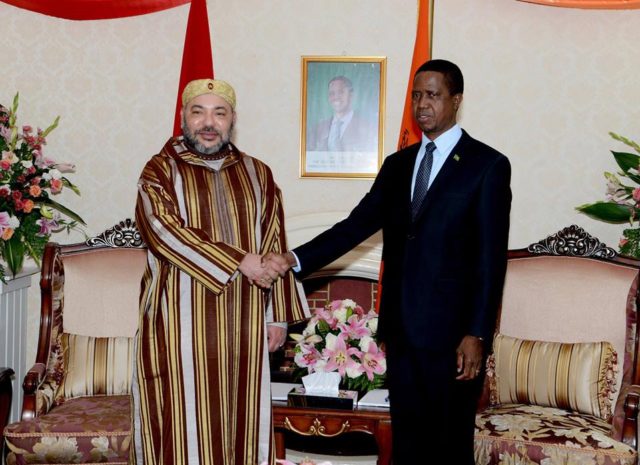 The list of African countries dumping the Polisario (armed, funded and harbored by Algeria), keeps growing. The latest of these countries is Zambia which has confirmed lately the withdrawal of its recognition of the self-proclaimed so-called Sahrawi republic (SADR).

The Zambian decision to pull out its recognition of the phantom entity and severe all diplomatic ties with the Algeria-backed separatist group was first announced by Foreign Minister Harry Kalaba during a visit to Rabat last July.

The confirmation of the Zambian decision comes following the visit paid last week by King Mohammed VI to this English speaking African country, which was among the African countries deceived by the Algerian propaganda. Zambia changed its stand thanks to the royal proactive African policy based on a genuine solidarity-based South-South cooperation.

During this visit, King Mohammed VI conferred with President Edgar Chagwa Lungu on cooperation prospects as well as on regional and international issues of common interests.

Zambian Head of State welcomed Morocco’s return to the African Union and described the royal speech during the AU summit as a historical moment paving the way for a promising contribution from Morocco to the development and stability of Africa.

Both leaders affirmed their unwavering commitment to ensuring the stability and prosperity of Africa. They also pledged to strengthen the bonds of friendship and cooperation between their two countries, underlining the role of investment and the private sector in promoting economic growth and development.

The royal visit to Zambia was crowned with the signing of several bilateral agreements in agriculture, tourism, renewable energy, education, training, industry, investment, air services, financial services and insurance, as well as the development of economic zones.

The two countries also agreed to join efforts in the fight against terrorism and work together to promote peace, security and stability on the continent, as well as to find lasting solutions to ongoing conflicts in Africa.

So, Morocco has gained the support of another African country despite hostile campaigns waged by its enemies, while the Polisario secessionists and their Algerian mentors are losing credibility and leverage.

Since 2000, nearly 40 countries, including 9 states of the Caribbean region, have pulled out their recognition to the pseudo-RASD. And many more are to come.