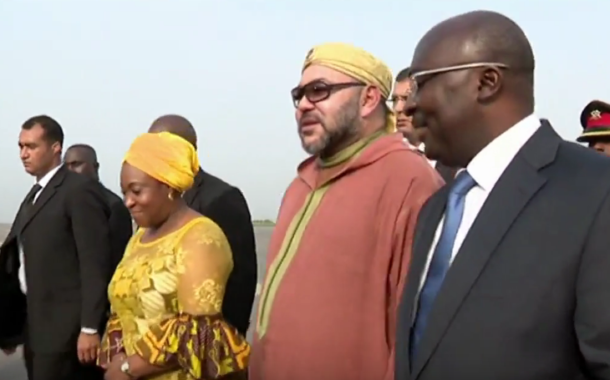 The government and people of Ghana have reserved a red carpet welcome to King Mohammed VI of Morocco who arrived Thursday in the west-African country, first stop of a new royal tour destined to keep momentum of inter-African cooperation.

On Friday, the Moroccan Sovereign held a private meeting with Ghana’s President Nana Akufo-Addo, before they exchanged symbolic presents.

The two heads of state afterwards presided over the signing ceremony of 25 partnership agreements covering the areas of finance and investment, agriculture, industry, electricity and renewable energies, insurance and reinsurance, and tourism among others.

The forum explored partnership opportunities and identified the sectors where the two countries can have competitive edge.

At the political level, the royal visit to Ghana will bring closer the two countries, enhance their dialogue and mutual understanding.

Ghana, which had long been a supporter of the Algeria-backed Polisario separatist front, was among the 28 member countries of African Union (AU) to have signed a motion backing Morocco’s request to rejoin the pan-African organization.

The motion, addressed to the AU summit in Kigali in July last year, welcomed Morocco’s bid to rejoin the African organization, and noted that the North African country is one of the founding members of the AU’s predecessor, the Organization of African Unity (OAU).

The document also called for the immediate suspension of the membership of the self-proclaimed RASD, which was illegally admitted in 1984 through the use by Algeria of threats, deceit, coercion and dirty petrodollar money.

Ghana is considered one of the most stable countries in West Africa since its transition to multi-party democracy in 1992. Formerly known as the Gold Coast, Ghana gained independence from Britain in 1957, becoming the first sub-Saharan nation to break free from colonial rule.

Gold, cocoa and more recently oil form the cornerstone of Ghana’s economy and helped fuel an economic boom. The country is the second largest economy of ECOWAS behind Nigeria and ahead of Côte d’Ivoire.

According to some analysts, Ghana, one of the world’s largest producers of cocoa, offers business opportunities in two main sectors, namely distribution, as a part of the population, which is getting rich, would consume products with higher added value, in parallel with the increasing number of shopping centers in the country. The other promising sector is that of ICT.

It is clear that if all these economic assets are combined with Morocco’s powerful private sector and know-how, they will create a new dynamic. The mix will also open up new opportunities serving the interests of the two countries and the two peoples.