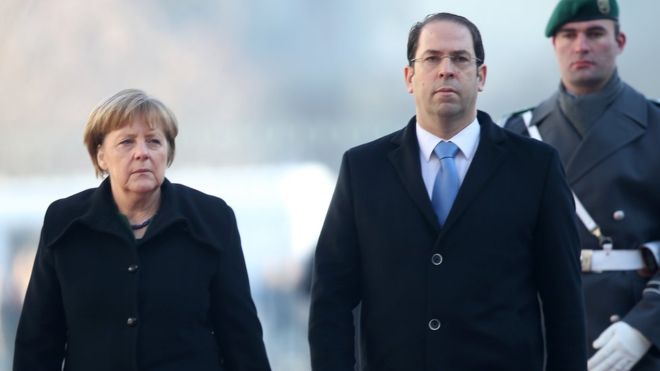 Immigration issues dominated talks between German Chancellor Angela Merkel and Tunisian Prime Minister Youssef Chahed with focus on how to process the repatriation of Tunisians from the European country.

Merkel told reporters that they discussed how the repatriation process “can be improved” as she revealed that around only half of the 3000 Tunisians in Germany are allowed to stay in the country.

“Cooperation with Germany works very well now” Chahed said but stressed that Tunis needs “clear evidence” from Berlin that those being expelled are Tunisians.

The issue of illegal migrants of Tunisian origin has been a thorny issue especially after last year’s Berlin Christmas market bombing that killed 12 people. The assailant, Anis Amri, was a Tunisian awaiting deportation. Germany claims his deportation has been slowed by Tunisian authorities’ failure to finish the paperwork.

Chahed declined any responsibility of Tunisian authorities stressing that they “have not made any mistakes” with regards to the attack. He stressed that “illegal immigrants who use false identity documents make it difficult and delay the process.” He had told the German paper Bild that “the biggest problem for Europe is refugees who go from Libya to Italy.”

The Tunisian prime minister sidelined Merkel’s proposal for migrants’ centers to be held in Tunisia stating that “setting up camps or reception centers was not an issue (in our talks).”

In her statement to reporters after her meeting with the Tunisian premier, Merkel unveiled a package of incentives to “voluntary repatriation”, including educational incentives and financial support for entrepreneurs. Yet, she warned that “whoever does not choose to return of their own free will then have to be returned involuntarily,” insisting that the process must be “quicker.”

In 2016, only 116 failed-asylum seekers were deported, a figure the German Chancellor deemed as “not enough.”

Tunis and Berlin seem entangled in a conflict of interest. Merkel wants to assure Germans as to their security and safety ahead of polls, following her open-door migrant policy, which contributed to an increase in attacks committed by immigrants. Meanwhile, Tunisia needs the remittances of its expatriates as its economy and finances experience difficult times.