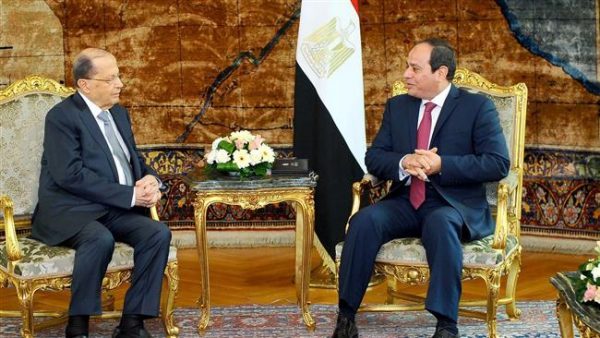 Egypt and Lebanon expressed their shared resolve to stand together against the dangers of terrorism challenging the whole region.

This came during the meeting in Cairo between President Abdel-Fattah al-Sisi and Lebanese President Michel Aoun who was on his first visit to Egypt as Head of State.

In a joint press conference that followed their meeting, Sisi acknowledged that terrorism has been of concern to the region and stated that he has agreed with Aoun “on the importance of standing together against the dangers of terrorism.” Both countries are affected by terrorism but Cairo has been worse hit in comparison to Beirut.

Sisi assured his guest of Cairo’s support in his “efforts to preserve stability and development in Lebanon.”

He said “a free, strong and stable Lebanon is a powerful force for the Arab world” while hailing it is “a pioneering model in the region for resolving political conflicts.”

President Aoun applauded the “unprecedented relationship” between the two countries and said that Lebanon “relies on Egypt in the attempt to resolve Middle Eastern crises.” He pointed out that the six years long war in Syria has “affected” Lebanon and other neighboring countries and hopes that Cairo could spearhead efforts to reach a political solution.