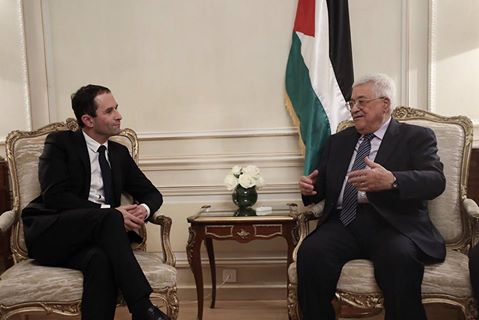 Benoit Hamon, the French Socialist Party’s candidate to the upcoming presidential elections Wednesday announced on his facebook page he would recognize the Palestinian State when he is elected on April 23 or May 7.

The candidate who met on Wednesday in Paris with visiting Palestinian leader Mahmoud Abbas wrote “I renewed to him my will to recognize the Palestinian State once elected President of the Republic.”

The 49-year old politician argued that recognition of the Palestinian State is a pre-requisite for peace in the Middle East region.

Early in January, prior to the Paris January 15 conference on the Palestine-Israel crisis, Hamon speaking to a French TV channel said that “Israel’s peaceful existence in the region depends on the recognition of the Palestinian State.”

It is the first time a French politician and presidential candidate holds such a stance on the issue.

In May, prior to the Palestine-Israel crisis conference, Valls was rather ambiguous saying the recognition of the Palestinian State would be premature and would endanger Paris diplomatic efforts.

French will elect their President on April 23 with run-off to take place on May 7 between the two candidates if no candidate wins an outright majority.