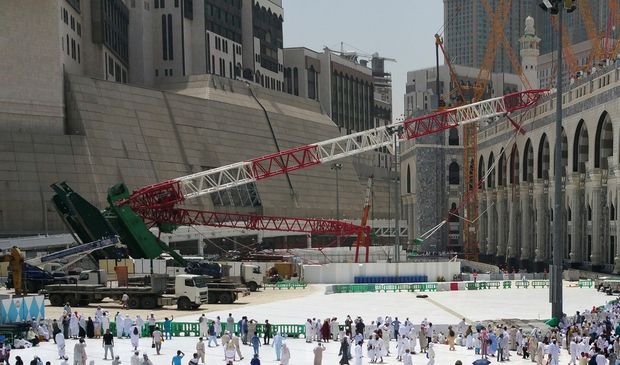 The Mecca Criminal Court that has been hearing the charges against 13 people who allegedly played roles in the crane collapse that killed scores of people and injured many at the Grand Mosque near the Kabba in September 2015 has dropped the case.

The court has been hearing the case for the past five months.

The crane collapsed after heavy winds toppled it leading to a fatal accident. The Bin Ladin Group was carrying out expansion works at the Grand mosque when the deadly accident occurred. It led to charges of “negligence leading to death, damaging public property and ignoring safety guidelines” against six Saudis, two Pakistanis, a Canadian, a Jordanian, a Palestinian, an Egyptian, an Emirati and a Filipino. One of the Saudis is said to be a billionaire. The prosecution is planning to appeal the court’s ruling.

However, eyebrows have been raised over the court’s decision, which referred to 13 people instead of the 14 who have been charged. It is unclear if it was an error or charges against one of the plaintiff have been dropped without making it public. Authorities have not yet commented on the matter.

Saudi Bin Ladin Group, which developed landmark buildings in the Kingdom, was founded more than 80 years ago but shortly after the accident, King Salman suspended it from taking part in new public contracts.