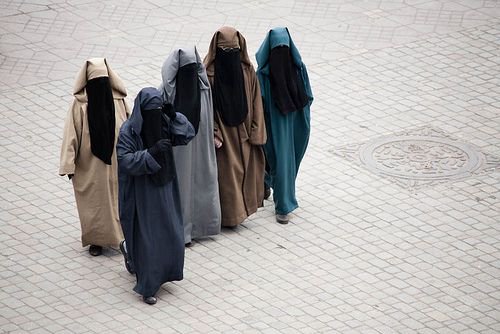 Morocco, one of the major allies of the U.S. and the West in the MENA region, has banned the wearing, the manufacturing or marketing of burkas (full veil), according to local media.

Though, no official government order has been issued, press reports say burka producers and traders received written or verbal warnings from the authorities telling them to stop making and selling the garments.

The ban is believed to apply only to full-face covering burkas. The majority of Muslim women in the country wear headscarves without the veil, or niqab.

Moroccan popular news website Le360 news quoted a senior interior ministry official who confirmed the ban of this garment in all the cities and towns of the North African kingdom.

Copies of the notice reportedly sent by Moroccan authorities to shopkeepers are circulating in social media fueling a heated debate.

Some approve the move which comes as terror threat is expanding and as the burka is used by some criminals to conceal their identities and commit their crimes, while others consider the ban as a “violation of women’s rights”, describing it as “an unnecessary discriminatory step targeting Muslim women”.

A Human Rights watchdog, ONDH, slammed the move, saying it is “arbitrary and violates the rights of women to express themselves and dress freely.”

The ban is in “contradiction with the international conventions of which Morocco is a signatory”, says the ONDH in a press release.

“The decision of the Ministry of the Interior is illegal and void because it does not rely on any legal text. It undermines diversity and freedoms”, adds the ONDH.

Yet, for the majority of Moroccans, the burqa is not actually a Moroccan garment, but rather a compulsory full veil imposed on women by jihadist groups.

Furthermore, this burka is not compatible with the tolerant version of Islam based on Maliki rite practiced in Morocco, which spearheads the Islam of the middle path doctrine, intercultural dialogue and respect of other faiths.