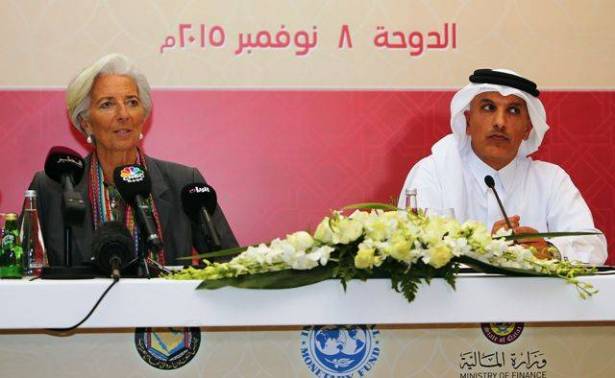 A statement released by an International Monetary Fund (IMF) mission to Qatar has outlined that the country is “effectively adjusting to the new reality of sustained lower energy prices” by implementing “adequate” policies to ease the pressure on the fiscal and external positions although the surplus of the Gross Domestic Product fell from 12.3% in 2014 to 1.2% last year.

IMF warned that low oil prices and an increment of US interest rates could “complicate efforts to bolster economic growth” and that could affect the government’s public investment program.

Qatar pegged its Riyal to the US Dollar and IMF called on authorities to “periodically” review it over the medium term to ensure that it continues to be “the best option” as the government eyes the diversification of the economy. The country is the leading exporter of liquefied natural gas.

The diversification efforts are expected to be boosted by the strengthening of the private sector, promotion of small and medium-sized enterprises as well as encouraging nationals to work in non-government jobs. Yet, “additional measures” are required to strengthen business in the country.

The abrogation of the ‘Kafala’, which literally means adoption, in favor of a new labor law was welcomed as it would ease the switching of jobs and departure from the country. The Kafala which came into effect in 2016 came under heavy criticism following the arrival of expatriates to help with development of infrastructures for the 2022 FIFA World Cup.

The IMF statement emphasized the need to consolidate fiscal policies and its potential impact on growth while supporting the broadening of the corporate income tax to include companies within the Gulf Cooperation Council as an extra revenue stream.