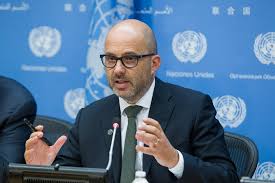 UN Humanitarian coordinator for the Palestinian Territories, Robert Piper, has appealed for at least $547 million in aid to help around 1.6million Palestinians living in Gaza, Judea and Samaria.

The Palestinian territories heavily depend on aid programs for their subsistence because of Israel’s blockade especially around the Gaza Strip under the control of Hamas.

Piper highlighted that “needs in Gaza remain particularly acute and humanitarian services provided by the international community remain a lifeline.”

The UN official’s appeal came days after Hamas stated that it would revenge the death of 49 year old Tunisian citizen, Mohamed Zawahri, assassinated in Sfax, Tunisia, allegedly by Israeli agents. Such an attack could worsen the situation of the population as Israel continues to maintain its policy of general retaliation by targeting both civilian and Hamas infrastructures. In Gaza, more than 50,000 people are still displaced as part of the aftermath of the 2014 hostilities, while 8,000 people in the West Bank are at high risk of forcible transfer due to a coercive environment.

Piper has stressed that “this humanitarian response must be coupled with bold political action” because international aid is “just trying to buy time” until an effective political reform takes place in the Palestinian Territories and a meaningful peace process between Palestinian authorities and Israel.

It is however unclear if the appeal for aid will get a favorable response because that of last year received only 47% of the $571 million assistance that was needed. Of the requested $547 stated in the appeal, around 70% of the amount will be dedicated to the implementation of projects in the Gaza strip where the situation of the population is dire.