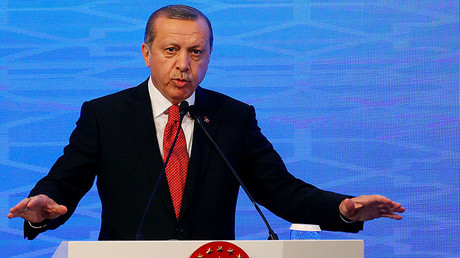 Tensions between Austria and Turkey have reached new heights after Foreign Minister Sebastian Kurz proposed suspending talks with Ankara for its accession to the European Union (EU) during the organization’s summit in Brussels.

Although the proposal was turned down by other EU member states, Turkish Minister for EU Affairs and Chief Negotiator, Omer Celik, stated that “there is no difference between the rhetoric of the Austrian foreign minister and the rhetoric of any racist party.” Austria has been “sabotaging the EU project,” he claimed.

Kurz defended Austria’s proposal saying “our standpoint was well-reasoned and clearly presented” and stressed that it was “wrong to continue accession negotiations as if nothing has happened in Turkey in the last few months.” He cited the crackdown on alleged sympathizers of the failed July 15 coup d’état and on the Kurdish separatists and armed groups as examples.

Ties between the two countries are expected to be cold as Turkish Foreign Minister Mevlut Cavusoglu said he “will no longer hold discussions with Austria, whose parliament makes decisions against us, whose media reports badly about us.” In what seems to be a retaliatory move, he stated that Turkey will henceforth “work against Austria at all levels.”

Meanwhile, Austria “is still open for dialogue and cooperation and is not slamming the door shut” according to Foreign Minister Kurz.

Turkey is a strategic ally to the EU. The wars in Syria and Iraq have turned it into a gateway to Europe and it is using that as an alibi during talks. Ankara has threatened to sideline the migrant deal that was reached earlier this year with the EU but the European leaders at the summit have called for a “full and non-discriminatory implementation of all aspects” of the deal as talks on other issues continue.

There have been concerns about the respect of human rights in Turkey since after the July failed coup d’état. Nevertheless, Turkey has been lately applauded for its role in ensuring a ceasefire in Aleppo, Syria, to enable the evacuation of civilians and the injured from the rebel-held areas as well as providing medical attention to them on its territory.