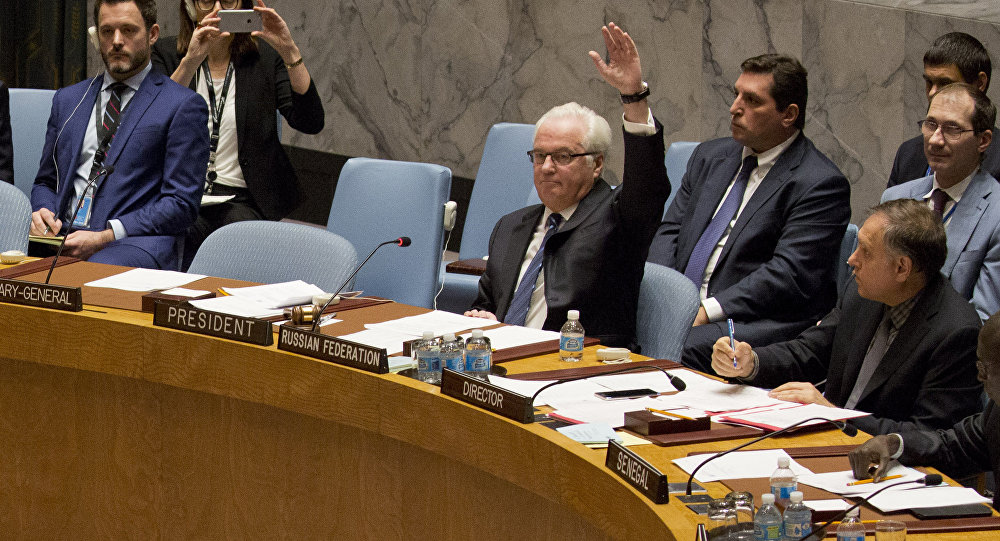 Western-backed resolution for a seven-day ceasefire in embattled Aleppo has been vetoed by Russia and China on Monday at the UN Security Council with the Russian Ambassador to the UN Vitaly Churkin raising concerns that it could be used by the rebels to reinforce their defense. Deputy US Ambassador to the UN Michele Sison equaled the veto to a “death sentence for innocent men, women and children” in Aleppo. She argued that Moscow’s concerns are “a made-up alibi” because it is “more focused on preserving its military gains than helping Aleppo’s citizens.”
British UN Ambassador Matthew Rycroft scolded Russia and China for rejecting the resolution and accused them of having “longstanding, misplaced faith in a despot who has killed nearly half a million of his own people.” China’s Ambassador to the UN Liu Jieyi reacted by blaming his British counterpart for “poisoning” the atmosphere and “abusing” the forum with his remarks.
Russia wants the talks with Washington scheduled to take place this week, for the withdrawal of rebel forces, to be concluded first before a truce can be introduced but the rebels have rejected calls to evacuate Aleppo. Foreign Minister Sergei Lavrov said the sooner the route and time frame of the withdrawal plan is agreed upon, the earlier the cease-fire can come into effect.
Syria’s Permanent Representative to the UN Dr. Bashar al-Jaafari blamed Western countries for pursuing the adoption of resolutions that are contrary to promoting international peace and security. He claimed that the government in Damascus is dedicated to fighting terrorism and will continue to protest against the cheap political blackmail practiced by some countries with regards to the Syrian war. He applauded the support received from President Assad’s allies.
Fighting is still continuing in Aleppo and the government has made significant gains since the beginning of the month with the support of Russian warplanes. Western countries heavily contest Moscow’s intervention in Syria because it has helped the government to recover a lot of territories that it lost to the rebel and extremist groups.