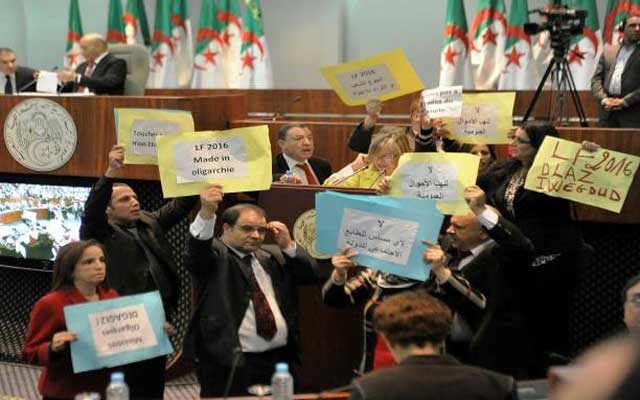 Algeria’s social cohesion seems on the brink of collapse as the country braces for imposing austerity measures including taxes and a lift on subsidies in response to the plunge in oil prices which have seriously diminished the country’s revenues.
As the low oil prices continue, Algeria’s foreign exchange reserves rapidly run out in a country where the government was able to fend off unrest and buy social peace in its restive population using subsidies, public sector jobs and salary increases.
The government responded to the crisis by the adoption of an appropriation bill imposing tax hikes and reducing subsidies in a desperate move to reduce the impact of the staggering oil prices on the widening budget deficit.
Observers see in the current Algerian economic crisis similarities with the late 1980s riots that proceeded Algeria’s dark decade. The opposition voices fears that the budget bill will spark public unrest and protests across the country.
Regime opacity, the authoritarian status quo and the uncertainties surrounding the succession to the current ailing President add to Algeria’s frailty and vulnerability to popular unrest.
Poor governance, corruption, unpropitious investment climate and lack of skilled labor are other issues that make economic diversification an uphill battle in a state where the population takes subsidies and public housing and public sector jobs for granted.
By the end of October, Algeria’s export revenues slipped by 23.44% standing at 22.7 billion dollars propelling the government to adopt austerity measures leading to a drop in imports, which stood at 38.5 billion dollars compared to 43.5 billion dollars by the end of October 2015.
The IMF estimates that Algeria needs a barrel price of 110 to maintain macro-economic balance at a moment economic analysts warn of an upcoming budget crisis if oil prices remain at current levels around $50 per barrel.