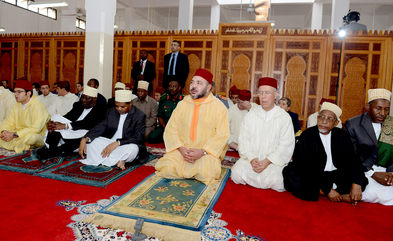 King Mohammed VI, who wound up Thursday a state visit to Tanzania and who is currently on a private visit to the Tanzanian archipelago of Zanzibar, performed the Friday prayer at the Ashura mosque in Zanzibar and donated 10,000 copies of the Koran to the authorities in charge of the management of religious affairs there.

The Tanzanian archipelago of Zanzibar, located in the Indian Ocean, hosts a large Muslim community of Arab, African and Indian origin.

In his Friday sermon, the Imam said the local Muslim community of Zanzibar is honored by the visit of the Commander of the Faithful, King Mohammed VI, underlining the strong and deep ties binding all Muslims thanks to their religion of peace, tolerance and brotherhood.

The Imam stressed the importance of the cooperation agreements signed between Morocco and Tanzania during the Sovereign’s official visit and underlined that these socioeconomic partnership accords will have positive impacts on all Tanzanians.

In his Friday sermon, he also thanked the Moroccan Monarch for his decision to build a mosque in the Tanzanian capital, Dar es Salaam. Dubbed the Mohammed VI Mosque, this religious project will be built over a 7,400 m2 plot and will accommodate more than 5,000 worshipers. The mosque will also include a library, a conference room, a cultural center and other facilities.

The Royal initiative came in response to the request made by Mufti Abubakr Zubair Ben Ali, Head of the Muslims’ National Council of Tanzania, who expressed need for this mosque in the city of Dar es Salaam.

Morocco has built many mosques in Africa, providing training, leadership and education to African Muslim clerics and students on Islam’s humanistic values and making significant contributions to local African Muslim communities in this 21st century where respect for pluralism and diversity is becoming more and more important.

The North African Kingdom set up few months ago a Foundation for African Ulemas to enable them maintain contact, enhance dialogue and exchange experiences.

Based in Fez, this Foundation is part Morocco’s religious training program for imams and sustained efforts to counter Islamic radicalization.

In March 2015, King Mohammed VI dedicated a leading Institute that provides training to hundreds of imams of various nationalities, mainly from Africa and also from Europe.

The Rabat-based center educates Imams to the precepts of a tolerant and non-violent form of Islam based on Maliki rite and teaches them how to fight extremism and religious radicalization through sound argumentation and dialogue.
Morocco has been providing, for many years if not for centuries, training to foreign Islamic scholars and imams, mainly from sub-Saharan Africa, in order to disseminate an “Islam of the middle path doctrine,” a vision of religion based on tolerance, intercultural dialogue and respect of other faiths.