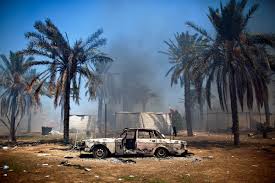 Tensions are still high in Tripoli as the battle for the control of the capital and the parliament continues between the UN-backed Government of National Accord (GNA) and the National Salvation Government (NSG) supported by a coalition of Islamist groups known as Libya Dawn.

NSG controls most part of the city and other government buildings following its latest attempt to take over places controlled by the GNA in an offensive that Khalifa Ghweil, leader of the National Salvation Government, said was due to the “popular will.”

The parliament uses Rixos Hotel for its sittings and it is being held by the GNA. In a statement announced on Libyan TV, the Presidential Guards showed their support to Ghweil and the NSG. UN Special Envoy Martin Kobler said he is “saddened by civilian casualties in Tripoli.”

Ghweil has tried to calm down fears that the rivalry between the two governments will be fatal as he gave assurances that “he did not want to spill any Libyan blood.” He also acknowledged inviting the Tobruk-based government to form a new government “together” but the proposal was rejected. The government in Tobruk fled Tripoli after Libya Dawn overpowered its forces.

The clashes in Tripoli are being termed as a coup d’état by some militia groups in the country while some are in support of NSG’s actions against the GNA. The militia groups consider that the GNA is backed by western countries and that it has already failed in its mission.

Elsewhere, the US has increased its airstrikes on the militants of the Islamic State in Sirte and Libyan troops on the ground are making progress. The operation against the extremist group began six months ago with the troops advancing at a slow pace but that has intensified since the US-backed airstrikes began in August.