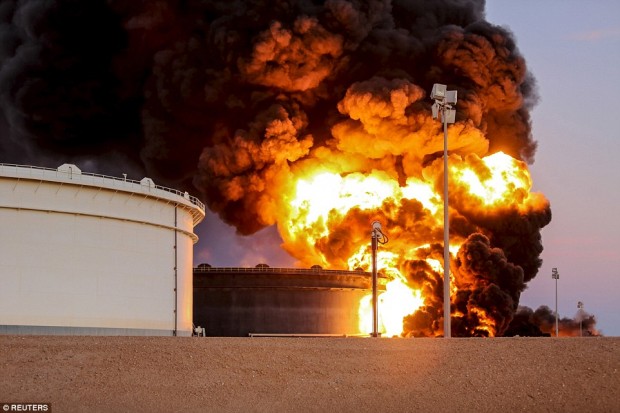 The Petroleum Facilities Guard (PFG) led by Ibrahim Jadhran launched an offensive attack on the oil terminals of Ras Lanuf and Sidra that they lost last week to the Libya National Army (LNA) under Khalifa Haftar’s command.

They were able to take-over the terminals for a brief period before being repelled by the LNA with the help of warplanes. National Oil Corporation’s (NOC) chairman Mustafa Sanalla called on the armed groups “to avoid taking actions that could damage our vital national infrastructure” as he reminded them that “our national recovery depends on these ports being open and our oil flowing freely.”

As the clashes intensified, a Maltese flagged tanker that was loading at Ras Lanuf terminal sailed off the Libyan coast as a safety and precautionary measure. A storage tank in Sidra was set alight during the battle. When Haftar’s forces took over the oil terminals, they handed them over to the NOC and Sanalla, who promised that operations would commence immediately after the necessary evaluations of the facilities are made.

Colonel Ahmed Al-Gatrani of the UN-backed Government of National Accord (GNA) alleged that the PFG was pushed back by airstrikes launched by the United Arab Emirates (UAE) and neighboring Egypt. The PFG and the GNA became allies last month after they reached a deal to end the blockade on oil ports with a payment package to the rebel group.

Spokesman Khalifa Obeidi of the LNA loyal to the Tobruk-based parliament said they have also taken over the town of Bin Jawad, 25 kilometers west of Sidra, during the counteroffensive.

Control over the oil infrastructure has been a major issue between Libya’s rival governments. The part of the country known as the oil crescent region is expected to witness several clashes between rival groups, as the group controlling the major oil terminals will be in a stronger position during political talks.