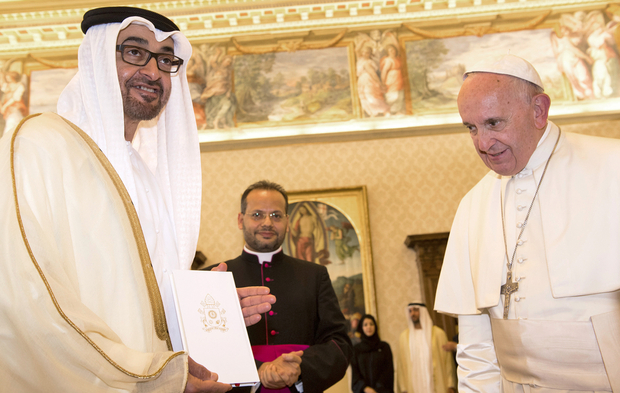 The Crown Prince of Abu Dhabi Sheikh Mohammed bin Zayed al-Nahyan discussed with Prime Minister Matteo Renzi of Italy bilateral ties and means to capitalize on the resources of both nations to boost their economic and investment cooperation. Sheikh Mohammed called for broader bilateral cooperation and increased number of effective partnerships in the economic, trade and development sectors. Renzi is optimistic that their relations will continue to be fruitful.

The Italian Ambassador to the United Arab Emirates (UAE) Liborio Stellino hailed the growing ties between the two countries which have been marked by a significant growth in trade.

The diplomat who described the UAE as a strategic partner for Italy said more than 600 onshore and/or offshore Italian companies are operating in the emirates.

The Crown Prince also visited the Vatican where he met with Pope Francis.

Discussions focused on the promotion of the message of co-existence, religious tolerance and humanitarian actions in a world that has been marred with violence, sectarianism, extremism and intolerance.

The Pope applauded UAE’s effort to promote and support sustainable development around the world as well as their humanitarian and philanthropic initiatives to provide education and health services to the populations in need.

On his part, Sheikh Mohammed hailed the Pope’s strive for peace, love and solidarity in the world and expressed hope that their collaboration will help to surpass the current challenges. He underlined the need to build bridges of collaboration and dialogue between different cultures and religions, and to stand in solidarity against those who promote religious strife, sectarianism, racism and intolerance, thereby threatening the security and stability of the world.