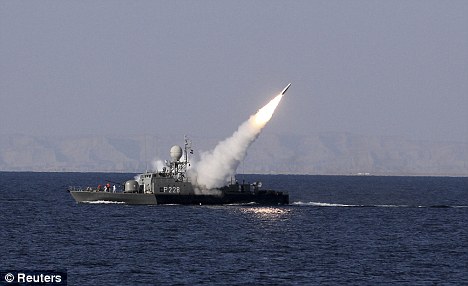 Provocation and tension between Iranian and US Forces in the Persian Gulf reached a new level after it was revealed that Iranian air-defense stations threatened to shoot down two US reconnaissance aircrafts.

According to Commander Bill Urban, spokesman for the 5th Fleet, the Iranian forces warned over the radio that they “will fire Iranian missiles” if the aircrafts entered their airspace. Three radio calls allegedly using “threatening language” were made but the US forces “responded in an appropriate and calm manner” according to a US defense official.

The September 10 incident was followed by the unveiling of a new high-speed catamaran-styled vessel by the Iranian Revolutionary Guards Corps (IRGC) on Tuesday. A banner with the message “America should go to the Bay of Pigs, the Persian Gulf is our house” was brandished on the side of the vessel to remind Washington of its 1961 failed attempt to end Fidel Castro’s regime.

IRGC Navy Chief Admiral Ali Fadavi said the deployment of “the speedboat will add to Iran’s deterrence power and will have an effect on the calculation of the enemy, particularly America” as he claimed that the latter’s presence has caused “insecurity and lawlessness” in the Gulf.

The 55-meter long vessel can transport a helicopter and 100 crewmembers according to state TV but its military capabilities were not unveiled.

“Iran, like many countries, has an internal political process that is defined by a lot of different dynamics,” explained US State Department spokesman Mark Toner before warning against the “disturbing trend” caused by Iranian vessels since the beginning of the year.

Tehran has threatened that it could close down the strategic Strait of Hormuz in the Persian Gulf and its increasing military armament has raised concerns in the region.

Iranian ships have on several occasions been involved in confrontations with US vessels. Last month, one of them fired warning shots before a US warship changed its course to avoid collision.