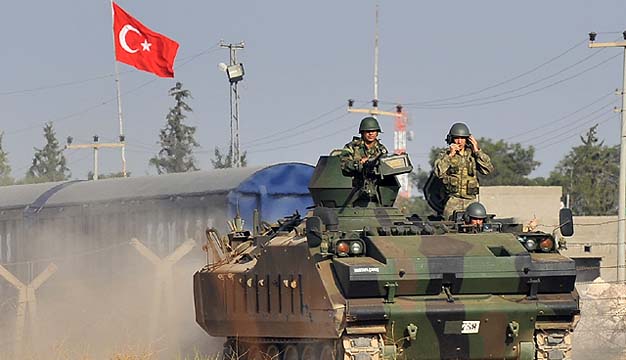 Ankara and Washington are at odds over the latest intervention of Turkish forces in Syria with US special envoy for the anti-IS war Brett McGurk lamenting on Twitter that it is “unacceptable and a source of deep concern” because clashes have been going on “in areas where ISIL is not located.”

Turkey has vowed that it will continue its military operation to protect its territory from IS attacks as well as oblige the Kurdish forces to withdraw from the east of the Euphrates River.

Turkey’s Deputy Prime Minister Numan Kurtulmuş said Washington is aware of “Turkey’s sensitivity on this issue” and urged it to “use its influence” on the Kurdish Democratic Union Party (PYD), the political wing of YPG, to withdraw from the area.

Foreign Minister Mevlut Cavusoglu also claimed that “the YPG is engaged in ethnic cleansing” in their controlled areas on the western side of the river and are also “placing who they want in those places.”

Meanwhile, McGurk is urging for calm and called on “all armed actors to stand down” while the Pentagon Spokesman Peter Cook said the US has “understood” that withdrawal of the Kurdish forces to the western side of the river “has largely occurred.” He added that clashes are taking place in “an already crowded battle space.”

The Turkish military operation is being described as an “occupation” of Syrian territory by Kurdish forces. Redur Xelil, chief spokesman for the Syrian Kurdish YPG militia, said Ankara’s claims of fighting their movement “west of the Euphrates have no basis in truth and are merely flimsy pretexts to widen its occupation of Syrian land.”

President Erdogan made the intentions of his government clear during a rally in Gaziantep, a town close to the Syrian border. “We will make any kind of contribution to the work to clear Daesh (IS) from Syria” and “for the issue of the PYD (Democratic Union Party) terror group in Syria, we have just the same determination.”

McGurk said “the U.S. is actively engaged to facilitate such de-confliction and unity of focus on ISIL, which remains a lethal and common threat.”