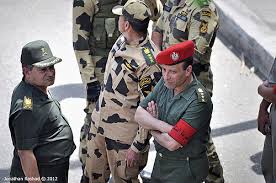 President Sisi on Wednesday ratified the unanimously approved law instituting cooperation between the armed forces and the police to protect public and vital facilities for a period of five years, beginning October 28.

The law was inspired by a 2014 presidential decree issued in October 2014 to fight militancy in the country, especially after the killing of 33 security personnel in the Sinai.

The presidential decree was to become null and void in the next two months. The decree considers as “vital” infrastructures needed for public services such as electric power plants and pylons, gas pipelines, oil fields, railroads, roads and bridges. Sabotaging or attacking such facilities are considered as “terrorist operations” and culprits will be tried in military courts.

Analysts are however wondering why the Parliament set the duration of the cooperation at five years considering that in June the cabinet extended its application for two years.

Kamal Amer, head of the defense and security committee at the House of Representatives, argued that the country’s present situation calls for the army-police cooperation to be extended for a longer period.

The Sisi administration is faced with security challenges and is also battling an extremist group affiliated to the Islamic State in the Sinai that plans to establish a Caliphate in the region.

Defense Minister Sedki Sobhi during a tour in northern Sinai on Wednesday warned that they have a zero tolerance policy to forces of evil and corruption and for those who want to seize Egypt’s land and territory.

Northern Sinai has been the most volatile region since the arrival of Sisi to power and the government claims that militant groups have ties with the Muslim Brotherhood.