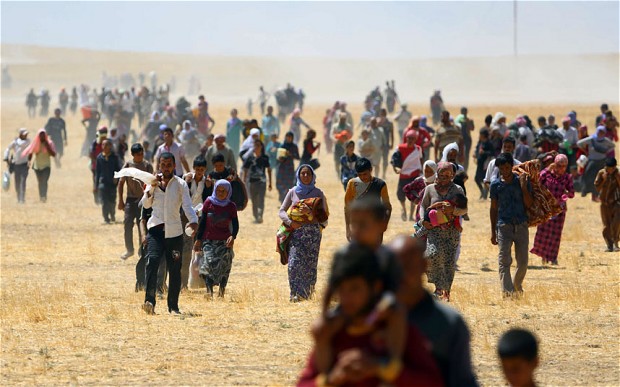 The “unimaginable atrocities” against the Yazidi minority in Iraq by militants of the Islamic State require that the international community work on the “rescue, protection of, and care for the Yazidi community.”

This came in a report drafted by a UN Inquiry Commission on Human Rights.

The attack on the community based in Sinjar, northern Iraq, dates back to 2014 when the extremist group began taking over territories, says the report, deploring that the crimes against the Yazidis, “including the crime of genocide, are ongoing.”

UN Secretary General Ban Ki-moon called on “all those engaged in the fight” against the extremist group to make the safety and release of “the people who remain in ISIL’s captivity, in particular the thousands of Yazidi women and children” their “prime objective in their military operations.”

He reiterated that the group’s “heinous crimes… against the diverse ethnic and religious communities of Iraq” “may constitute war crimes, crimes against humanity and even genocide.”

The report pointed out that the IS group killed or beheaded Yazidi men, sold women and girls as slaves and engaged them in sexual slavery. It is estimated that more than 3,200 women and children continue to be under their custody and are “subjected to almost-unimaginable violence.”

IS was forced out some parts of Sinjar by Kurdish forces but it still has control of some areas in the southern part of the city. Peshmerga Commander Qashim Shesho said the extremist group continues to target the city with mortars. He said they are ready to launch a ground assault “but the decision belongs to the US” because they can provide aerial support. His statements were refuted by Colonel Steve Warren who denied that they make the decisions. Warren said “the government of Iraq and the Iraqi Security forces, including the Peshmerga, make all decisions.”

The Yazidis have faced several atrocities as history states that they have been repeatedly persecuted by successive governments and invading armies.

On June 16, an independent commission of the United Nations Human Rights Council ruled that self-proclaimed Islamic State is guilty of committing war crimes, crimes against humanity and acts of genocide against the Yazidi community.