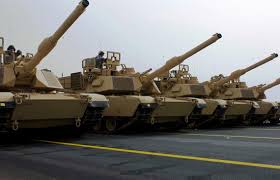 Morocco, US major ally in the North Africa and Middle East, has received the 1st batch of US made- M1A1 Abrams tanks after the approval by the US Congress of the arms sale deal passed with the North African country.
The deal includes the tanks’ associated parts, equipment, logistical support, personnel training, radio systems and machine guns. The package also includes ammunition rounds, smoke grenade launchers, support equipment and training equipment
According to US Defense Security Cooperation Agency, this sale will help improve the security of a major Non-NATO ally that continues to be an important force for political stability and economic progress in Africa.
It will also contribute to the modernization of Morocco’s tank fleet, enhancing its ability to meet current and future threats, says the US agency.
These tanks will enable Morocco achieve its goal of updating its military capability while further enhancing interoperability with the U.S. and other allies.