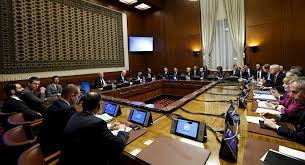 Senior Russian, American and United Nations officials are expected to meet in Geneva next week to discuss the war in Syria and special envoy Staffan de Mistura’s spokeswoman Jessy Chahine said “our hope is that any discussions on Syria will help move forward the process so we can also get to starting the next round of intra-Syrian talks.”

The meeting is expected to serve as a run-up to the resumption of talks between Syrian warring parties but Chahine declined to give details of the agenda and participants. However, both Russia and the U.S.-led airstrike campaign seem to be boosting and changing their strategy in the country as they continue to back opposing sides.

Moscow has reportedly appointed Col. Gen. Alexander Dvornikov as the new commander of the Russian operation in Syria according to sources. He replaces Lt. Gen. Alexander Zhuravlev who has been heading the operation since September 2015.

Observers think that the change of leadership could lead to a change of strategy after Russia withdrew most of its forces in March saying it has attained its objective.

In the U.S., defense and foreign affairs heads of members of the U.S-led coalition met to discuss plans to counter ISIS as Secretary of State John Kerry said “even as it is losing ground in the Middle East, we know already that they’re going to try to transform themselves into (a) global terrorist organization.” They discussed information sharing and real-time communication between countries to foil the extremist group’s attack as they prepare for the assault on Mosul, ISIS main headquarters.