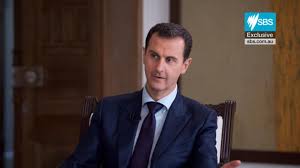 “They attack us politically, and then they send their officials to deal with us under the table, especially their security officials- including their government,” President Assad stated in an interview with Australian based SBS channel to be fully aired on Friday.

Assad accused western countries of what could be described as hypocrisy saying “all of them do that as they don’t want to upset the U.S.” before adding that “in fact, most of the Western officials only repeat what the U.S. wants them to say.”

President Assad has refused to step down from power as demanded by opposition armed groups and western countries. He referred to the rebels as terrorists and deplored the statements made by Australian Prime Minister Malcom Turnbull who referred to him as a murderous tyrant while opposition leader Bill Shorten labeled him as a butcher. Assad said the Australian politicians are “disconnected from our reality because I’m fighting terrorists.” According to the Syrian president, “if you call fighting terrorism butchery, that’s another issue” because the army, government and the whole institutions are fighting terrorists.

Bob Bowker, Australia’s Ambassador to Syria, said “the reality is that Assad is seen in the West as an unfit leader to be dealt with.” He added that he is seen in the Arab world as a leader who has “lost credibility…. through a series of miscalculations on his part, rather than through the behavior of those other Gulf states to which he was constantly referring in that interview.”

The war in Syria has also been fueled by the participation of foreign forces either on the side of the pro-government, rebel or extremist forces. Assad said “foreigners” coming into the country “without the permission of the government” are “illegal, whether they want to fight terrorists or want to fight any other one.”