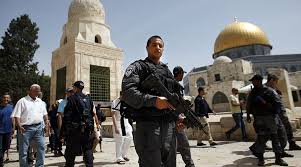 A third day of clashes between Israeli forces and Palestinians at the Al-Aqsa mosque compound has left more than 30 Palestinians injured while dozens were arrested.

Israeli police held the Palestinians responsible for the scuffles claiming that “masked youths” disrupted visits of non-Muslims to the Temple Mount referred to as the Noble Sanctuary by the Muslims. Palestinian officials say the visit trampled on a tradition that only allows Muslim worshippers to the compound during the last 10 days of Ramadan.

Israeli police spokesman Micky Rosenfeld said the area will be closed to visitors until the end of Ramadan, which is next week. Scores of Israeli security forces have reportedly encircled the al-Aqsa Mosque compound. Palestinians are reported to have injured a 73 year old woman at a nearby plaza with a stone while the Israeli police used rubber bullets and batons to disperse the protesters.

The al-Aqsa compound has been at the center of numerous confrontations between Muslims and Jews in East Jerusalem. Jews and other non-Muslims can visit the site but are banned from praying there. Israel occupied the area in the 1967 war but its authority is not recognized by the international community. Jerusalem is also a key issue in negotiations between Palestine and Israel for a two-state solution as both states want it to be their capital.

UN Secretary General Ban Ki-moon said after a meeting with Israeli President Reuven Rivlin in Tel Aviv “a negotiated two-state solution remains the only viable option to prevent perpetual conflict and to achieve the legitimate aspirations of both peoples.” He pointed out that Israeli occupation of Palestinian territories “has not brought security for Israeli” and underlined that “nearly 50 years of occupation has had a devastating impact on Palestinian lives, undermining the belief in a peaceful resolution to this conflict.”