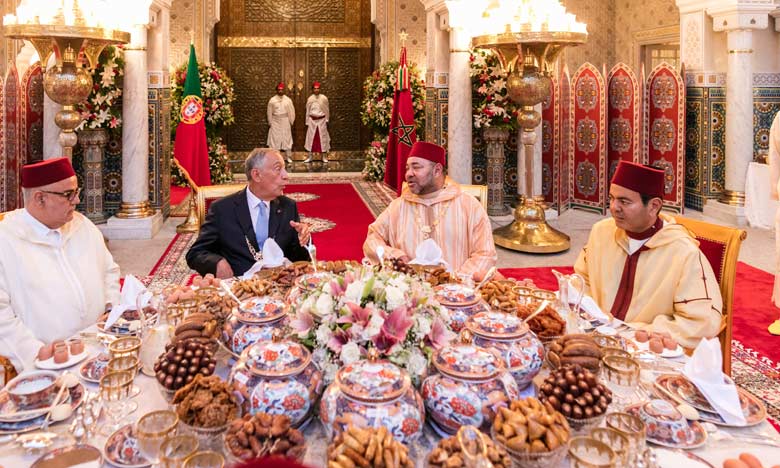 King Mohammed VI held, on Monday at the Royal Palace in Casablanca, tête-à-tête talks with Portugal’s President Marcelo Rebelo de Sousa, arrived earlier in the day on an official visit to Morocco.

On this occasion, the Sovereign decorated the Portuguese Head of State with Wissam Al Mohammadi, the highest honor in Morocco.

For his part, President Marcelo Rebelo de Sousa decorated King Mohammed VI with the Grand Collar of the Military Order of Saint James of the Sword, the highest Portuguese honorary decoration awarded to foreign heads of State.
Later in the evening, King Mohammed VI hosted an official iftar in honor of the Portuguese President and his accompanying delegation at the Royal Palace in Casablanca.

The Portuguese Secretary of State for Foreign Affairs and Cooperation, Teresa Ribeiro, described, in a statement to reporters in Casablanca, relations between Morocco and Portugal as excellent and called for enhancing these relations in the political, commercial and cultural sectors.

The Portuguese official who highlighted the long lasting friendship between the two countries and the “importance” of the President’s visit, reiterated her country’s support to Morocco within the European Union and at other international fora as well.

Actually, Portugal is among the EU member states that have officially expressed their support to Morocco and are sparing no effort to overturn a ruling of the European Court of Justice, suspending the Morocco-EU agricultural agreement concluded in 2012.

Portugal, along with France, Belgium, Germany and Spain reaffirmed support for the Moroccan position and for preserving the agricultural agreement between Morocco and the EU.

Portugal’s stand is not surprising as the European country is fully aware of the role played by Morocco in preserving peace and stability in the Mediterranean.

Last April, Morocco and Portugal agreed to bolster cooperation in security, energy, maritime transport, tourism, training and scientific research. They also signed an agreement to conduct the feasibility study on the setting up of an undersea at 1,000 megawatt power connection, which would be the second Europe-Africa link.

So, the Portuguese President’s official visit to Morocco, his first to an Arab country, reflects the deep friendship, fruitful cooperation and acting solidarity binding the two countries. These strong relations are also based on the two countries’ common history and on the noble values shared by the two friendly peoples.