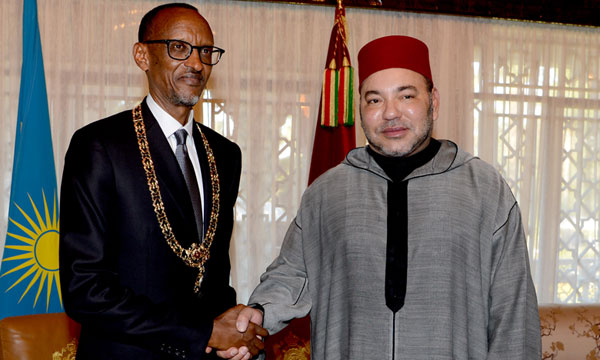 Morocco and Rwanda are ushering in this week a new era of cooperation and partnership, translating thus the two Heads of State’s shared political will to consolidate bilateral ties.

This is taking place on the occasion of the official two-day visit President Paul Kagame of Rwanda started on Monday to Morocco.

Shortly after arrival, King Mohammed VI held tête-à-tête talks with his guest and decorated him with “Wissam Al-Mohammadi”, the highest honor in Morocco.

The contents of the tête-à-tête talks were not disclosed but earlier press reports said that the two African leaders would discuss new approaches and new initiatives to deepen the two countries’ relations in all areas.

Rwandan media also commented that President Kagame’s first official visit to Morocco aims at underlining the close relationship existing between the two countries, while Moroccan media underscored that the visit will open a new chapter in bilateral political and economic relations.

Later in the evening, King Mohammed VI hosted an official iftar in honor of President Kagame and his accompanying delegation at the Royal Palace in Casablanca.

This is Kagame’s first official visit to Morocco but this is not the first time he makes a trip to the Kingdom. In November last year, he took part in a forum held in the Moroccan northern city of Tangiers by Amadeus Institute, a Moroccan think tank. He was awarded MEDays Grand Prix in recognition of the efforts he made to restore faith in his countrymen and lead his country, which was marked by one of the most horrible tragedies in modern history, towards freedom and democracy. President kagame was also honored for prioritizing education and health and for investing in human capital to create inclusive and sustainable growth.

During his trip to Tangiers, President Kagame hailed Morocco’s increasing commitment to Africa and invited Moroccan investors and business people to do business in Rwanda.

On Monday, Rwandan Foreign Minister Louise Mushikiwabo, who is part of Kagame’s party, expressed admiration for the entrepreneurial spirit of Moroccan businessmen and for the progress achieved by the North African country.
She told reporters that her country is eager to bolster cooperation with Morocco and to share its experience, particularly in the areas of housing, crafts and investments.

As underlined by analysts, President Kagame’s visit in Morocco will give a new momentum to political, economic and social relations between the two countries, especially so that the North African Kingdom, which has established a very strong partnership with West African countries, is now seeking to upgrade its relations with other states, mainly in central and eastern Africa.

So, enhancing partnership with Rwanda falls in line with the Kingdom’s African strategy and efforts to promote South-South cooperation, spearheaded by King Mohammed VI, who is convinced that economic and social development secures peace and stability.