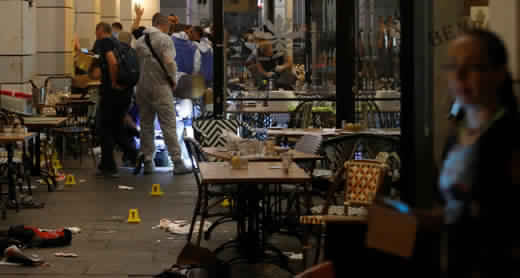 Two Palestinians, allegedly cousins, went on a shooting spree in Tel Aviv killing at least four people and injuring around 16 people on Wednesday night at the Sarona shopping center. Israel has reacted to the attack by freezing the 83,000 entry permits that it gave to Palestinians and is preparing to demolish the houses of the assailants who were apprehended.

The attack was described by Prime Minister Netanyahu who visited the scene as “a savage crime of murder and terrorism” while President Reuven Rivlin said it is “despicable” and “Israel will not be disheartened” by terrorism because it is a “difficult and long” struggle and they will “relentlessly pursue the perpetrators.” No group has claimed responsibility for the attack.

A statement from Fatah stated that the Jewish State was “reaping the repercussions of choosing violence against the Palestinian people.”

Hamas movement in the Gaza Strip which claimed the gun attacks said the Palestinians perpetrators of the attacks, identified as Muhammad and Khalid Muhamra from Yatta in the southern West Bank, were members of its organization, Israeli “Time of Israel reports.”

Hamas hailed the attack as “heroic” and urged the “Zionists” to brave for more “surprises” during Ramadan. The spokesperson for Palestinian Islamic Jihad Daud Shahab also threatened more attacks, saying that the “Jerusalem Intifada” will not end until “all of Palestine is restored.”

Tel Aviv considers such statements as incitements for more violence against Israelis. The Palestinian Authority is yet to release a statement

Commenting on the attack, Hamas spokesman Sami Abu Zuhri held Israel responsible saying that “the Tel Aviv operation is a natural response to Israeli desecration of the Al-Aqsa Mosque and the crimes against the Palestinian people.” He claimed that the Sarona attack is “evidence that the intifada continues and the occupation has failed to suppress it.”

Israel has already begun to increase the presence of security forces in public places as a deterrent measure. A new round of hostilities could be on the horizon.