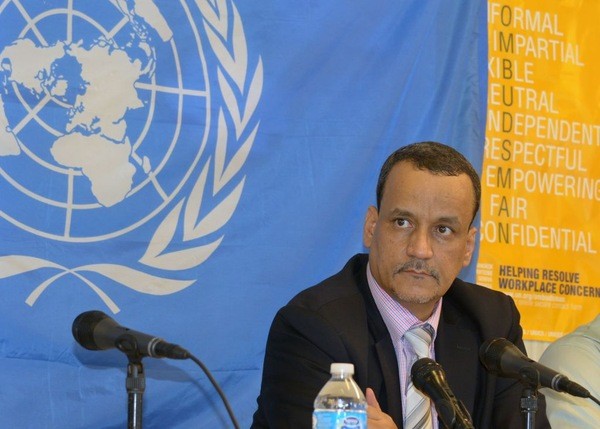 Ismail Ould Cheikh Ahmed, UN’s special envoy for Yemen, said talks being held in Kuwait are progressing but underlined that reaching an agreement for a sustainable and inclusive settlement cannot be reached overnight.

He said “there is no time limit” to seal a deal and the delegations will stay in the Kuwaiti capital for “as long as it takes.” The special envoy said although “hope” is coming out of the talks, “the situation on the ground is dire” and it could only be overturned by the parties at the talks.

The declaration of the cessation of hostilities ahead of the talks helped to reduce violence and facilitate relief aid. Ismail said the international support is stronger than ever and the UN is determined to achieve a lasting peace. The talks have suffered from several hitches with the government delegation suspending its participation twice following frustrations with the Houthi Movement.

Discussions on details of the elements to be included in a comprehensive agreement started this week. Reuters reported that sources from both delegations said a prisoner exchange deal has been reached and the process is expected to take place before Ramadan as part of a goodwill gesture, which would also reinforce trust between them. Sources from the Houthi Movement delegation said 1,000 prisoners would be swapped, while a government source said the agreement entailed the release of “all detainees,” who number more than 4,000.

Detailed discussions have also begun on specific and sensitive matters based on the agreed reference points highlighting the importance of guarantees and reassurances to ensure the implementation of the agreement to be reached. The creation of an “Economic Task Force” was proposed by special envoy Ismail to save the remaining of the country’s economy and finances disrupted by the fighting.

Meanwhile, the Saudi-led Arab coalition is trying to keep the records straight with a released statement stressing that its military operations respect “the rules of international humanitarian law and human rights” to deny violation accusations made by human right groups.