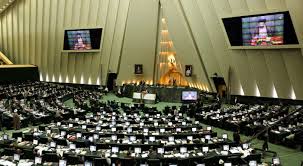 The Iranian parliament has requested that the government should demand for compensation from the US for its “hostile actions and crimes” towards the country for the past 63 years. The law voted by the parliament on Tuesday accused the US of causing “material and moral damage” for its role in the 1953 coup d’état against nationalist leader Mohamad Mossadegh and the 1980-1988 Iran-Iraq war. The demand for compensation package also includes the destruction of the country’s oil platforms in the Gulf and spying against the country.

The law passed by the outgoing parliament dominated by conservatives is seen as a retaliatory action against a US Supreme Court decision.

In April the Supreme Court ruled that Tehran should give $2 billion of its frozen assets in New York as compensation for alleged bombings that it carried out in 1983 on a US Marine barracks in Beirut, Lebanon, and on the Khobar Towers in Saudi Arabia in 1996.

Rouhani warned Washington shortly after the court ruling that “we will not allow the United States to swallow this so money so easily” and added that they will undertake international legal action to recover the sum if the ruling is executed.

The just voted law did not fix any amount for the compensation but Vice President Majid Ansari said Iranian courts during the debate “already ruled that the US pay $50 billion in damages for its hostile actions.”

Washington has not reacted to the law voted by the Iranian parliament.

Ties between Tehran and Washington are still cold after hopes that the July 2015 nuclear deal will mark a fresh beginning. The two countries do not have diplomatic ties and Switzerland has been representing their interests in both states.